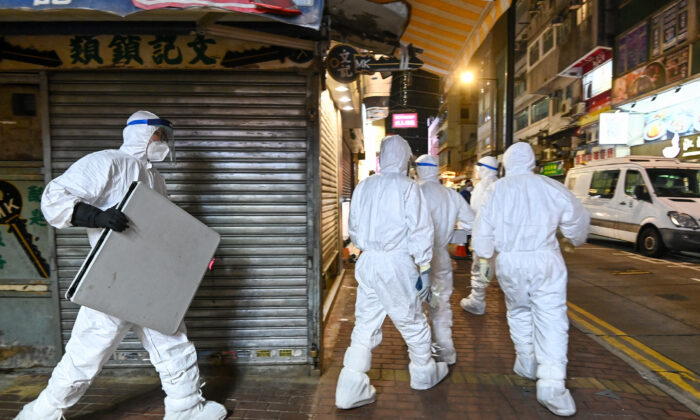 Hong Kong officials are killing hamsters by the thousands after declaring the pet rodents responsible for spreading COVID-19. Meanwhile, in China’s mainland, the blame has been put on international mail packaging.

As one of the world’s last major holdouts of a zero-tolerance approach to the virus, China is fanning unusual theories about the source of emerging COVID-19 clusters despite doubts from overseas experts about the likelihood of such claims.

On Jan. 18, Hong Kong ordered 2,000 hamsters, chinchillas, rabbits, and other small animals to be “humanely” put down after a health check on the rodents found 11 carrying the Delta variant of the virus that causes COVID-19. All are hamsters imported from the Netherlands, from a local pet shop where a 23-year-old worker tested positive for COVID-19.

While the officials acknowledged that there’s no clear evidence hamsters could transmit the virus to humans, they are telling pet owners who bought hamsters from any store in the city beginning Dec. 22, 2021, to hand over their animals for culling. Those who visited the pet store after Jan. 7 are subject to quarantine. All 34 pet stores in the city that sell hamsters are now shuttered, and imports of all small mammals have come to a halt.

Hong Kong’s pet killing follows heightened virus containment measures in Beijing, where authorities suggested that mail from Canada might have been the culprit for the city’s first Omicron case.

The city’s health officials noted that the Omicron patient, a 26-year-old woman who hasn’t traveled outside Beijing recently, handled a parcel sent from Canada via the United States and Hong Kong before developing a sore throat two days later. They have detected the Omicron variant on both the outside of the package and in its contents, as well as on other mail samples delivered from the same origin, the officials said.

“This is something not only new but intriguing and certainly not in accordance with what we have done both internationally and domestically given what we know about the transmissibility of Omicron,” he told reporters at a Jan. 17 press conference.

Health experts have generally assessed the risks of virus transmitting through contaminated surfaces to be extremely low. The World Health Organization (WHO) has said that coronaviruses in general “need a live animal or human host to multiply and survive and cannot multiply on the surface of food packages.”

No other countries have reported alleged packaging-related transmissions. Over a one-year period starting in November 2020, Taiwan’s National Health Command Center has analyzed close to 900 samples from refrigerated and frozen food packaging imported from 30 countries—China included—and all of them returned negative COVID-19 test results, the center told The Epoch Times.

Touting the theory that the virus might have come from somewhere other than China is hardly new for the Chinese authorities. In October 2020, Beijing said an outbreak in the port city of Qingdao originated from a shipment of imported cod. In a June 2020 outbreak linked to a Beijing wholesale market, officials pointed to frozen salmon from Norway as the cause, citing a sample on a cutting board used for processing the fish that tested positive for COVID-19.

Last July, amid tensions between India and China, Beijing withheld more than 1,000 containers of Indian shrimp on the grounds that the packaging allegedly contained virus residues.

In a bid to deflect growing scrutiny on Beijing’s coverup of the pandemic origins, authorities and state media have consistently put forward claims, without credible evidence, that the virus originated outside of the country. Following a WHO–China joint virus probe in China’s Wuhan Province last year, Chinese authorities have repeatedly called for origin tracing efforts to begin outside of China.

The regime’s pandemic-control actions, though, have also come at a particularly sensitive time for Beijing.

Less than three weeks before the opening of the Winter Olympic Games, Beijing and cities across China have struggled to stamp out waves of COVID-19 infections.

Hundreds of Omicron infections have surfaced in multiple parts of China even as Delta cases continue to spike. After the Omicron variant extended its reach to Beijing on Jan. 15, Olympic organizers called off ticket sales to the general public, saying entry would be limited to a targeted group of spectators.