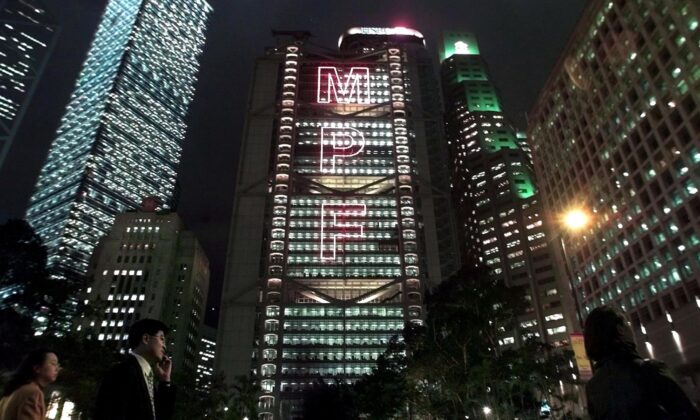 The letters "MPF" light up on the exterior of Hong Kong Bank as a reminder to the Dec. 1, 2000 deadline for Hong Kong's territory-wide pension scheme, the Mandatory Provident Fund (MPF) in Hong Kong, on Nov. 28, 2000. (Frederic J. Brown/AFP via Getty Images)
HK Current Affairs

Hong Kong recently approved a legislative amendment clearing the way for the city to invest its residents’ pension fund in debt securities issued or guaranteed by Beijing. The move comes when foreign investors are ditching Chinese debt at a record pace.

“An MPF constituent fund could invest up to 30 percent of its total funds in debt securities of the same issue issued or unconditionally guaranteed by an exempt authority,” according to the HK government press release. “All of the funds of the MPF constituent fund could also be invested in debt securities comprising at least six different issues issued or unconditionally guaranteed by the same exempt authority.”

The change happened at a time when the Chinese debt has become less appealing to offshore investors and foreign investment outflows have surged since February.

In March, Goldman Sachs lowered its assessment of Chinese CGB from bullish to neutral, according to a Bloomberg report.

BlackRock also dropped its bullish outlook on China due to Beijing’s zero-COVID policy and extensive lockdowns, South China Morning Post reported on May 10.

Furthermore, yields on most U.S. bonds have surpassed their Chinese counterparts. In particular, the U.S. nominal 10-year bond yield on June 1 was 2.94 percent compared to China’s 2.76 percent, an 18 basis point difference.

As foreign investors pull out of the bearish Chinese bond market, the Hong Kong legislature, instead, chooses to facilitate the buying of Chinese debt with its residents’ pension funds.

“The Amendment Regulation was made in response to demands from both MPF scheme members and the industry,” Christopher Hui, Hong Kong’s Secretary for Financial Services and the Treasury, said in the press release.

The Mandatory Provident Fund Schemes Authority supervises the operations of MPF Schemes. According to its quarterly report released in March (pdf), about 77 percent of employed Hong Kong residents have enrolled in MPF schemes.

The asset value of MPF has reportedly declined for five consecutive months, with an estimated loss of HK$27 billion ($3.5 billion) in May, bringing its accumulated loss in 2022 to around HK$157 billion ($20.4 billion), according to a May 26 press release by MPF Ratings, a HK retirement savings watchdog.