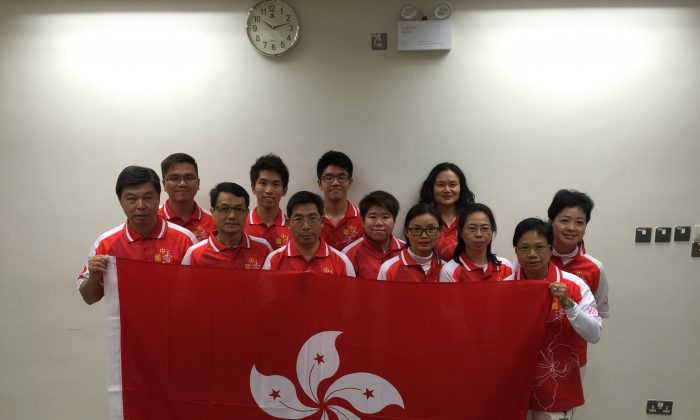 The Hong Kong team at Victoria Park on Monday, January 18, 2016 after conducting their last practice for the 11th Asian Lawn Bowls Championships and the 9th Asian U25 Singles Champions to take place in Brunei between Jan 21 and Feb 1. The team is working hard to try to better the record of five gold medals achieved in the last competition. (Howard Poon)
HK Lawn Bowls

The Hong Kong lawn bowls team aims to defend the five titles they earned in the last Asian Championship when they fly off to Brunei today, January 21, to participate in the 11th Asian Lawn Bowls Championships and the 9th Asian U25 Singles Champions.

In the last championship, which was held in Shenzhen, China, in December 2014, Hong Kong achieved their biggest ever success by becoming the overall champion, and men’s and women’s champion. The team also won medals in all the categories entered, with an aggregate of five golds, three silvers and two bronzes. The gold was for the singles and pairs of both gender and also for the U25 girls singles.

Due to the unavailability of some of the squad members, this time Hong Kong has introduced new members into the team, keeping only two senior bowlers who played in the last Asian Championship.

Kowloon Bowling Green Club player Tony Cheung will defend his gold in the men’s singles and partner with young bowler James Po will try to retain the pairs title. In singles the players are divided into two groups and Cheung is placed in a strong group including Malaysia and India. He needs to finish in the top three of the group to get through to the knock-out stage.

For the ladies, only Craigengower Cricket Club bowler Helen Cheung remains from the previous team. Cheung won a gold in the pairs with Dorothy Yu last time and she will play in the triples and fours this year.

The other members of the ladies team are Camilla Leung, Phyllis Wong, Emmie Wong and Shirley Ma.

In the youth competition, top Hong Kong girl bowler Vivian Yip will be keen to win her second singles title in a row. She will play against bowlers from Brunei, China, India and Malaysia.

The boys will be represented by Hong Kong Youth Team member Jason Choi, who is hoping to improve on his 6th place finish in the boy’s singles in the last competition.

The event will be held at the Hassanal Bolkiah Sports Complex in Berakas, Brunei. The event was originally scheduled for last August but was postponed to Jan 24 to Feb 1. A total of 12 bowling countries in the region will participate in the event, including host Brunei, China, Hong Kong, India, Japan, Macau, Malaysia, Pakistan, Philippines, Singapore, Sri Lanka and Thailand.

In all disciplines, players are divided into two groups to play out a round robin, with the top one qualifying directly for the semi-finals and the second- and third-placed players play off for a position in the semi.

The finals will be played between Jan 27 and Feb 1.

The Triples League continues at 2:30pm on Saturday Jan 23 at all greens in Hong Kong. The Women’s National Knock-out singles will be played on Sunday Jan 24 from 9:00am until 10:00pm, with early rounds being played at various venues in Hong Kong leading to the finals to take place at the Kowloon Cricket Club.