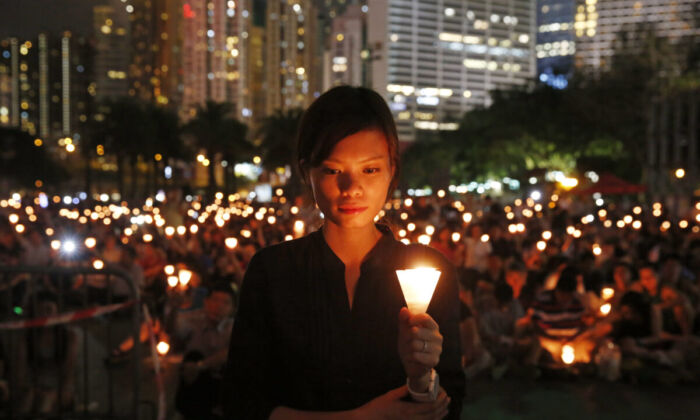 The group behind the annual Tiananmen Massacre vigil in Hong Kong has officially announced its dissolution, 32 years after its establishment when Beijing cracked down on student-led protests in 1989.

The Hong Kong Alliance in Support of Patriotic Democratic Movements of China voted to disband on Sept. 25, after local police arrested five of the group’s leaders in early September. Core members voted 41–4  in favor of disbandment at a meeting, drawing an end to more than three decades of activism.

Jailed Alliance leaders Albert Ho and Lee Cheuk-yan had sent letters to its members calling for disbandment, according to a letter disclosed by the group prior to the vote.

Following approval of the resolution, the Alliance said it wasn’t clear how the events of 1989 would be commemorated in the future.

“We still think that in the coming future, Hong Kong people will use different ways to stand up and commemorate,” Alliance spokesperson Richard Choi said.

Thirty-two years ago, the Alliance assisted fleeing student leaders and activists from Tiananmen Square, providing shelter and financial support. In 2014, it opened a Tiananmen Square massacre museum, the first such museum in the world. However, it was shut in June and was recently raided by the police.

The secretary of security had given the Alliance two weeks to explain why it shouldn’t be struck off the Companies Register, according to a letter issued on Sept. 10. Otherwise, the group would be dissolved.

The police’s national security department had also frozen $283,000 of assets belonging to the group in early September.

“Even if it was not formally disbanded, it would exist in name only,” China expert professor Feng Chongyi, of the University of Technology in Sydney, told The Epoch Times.

Feng said the aims of the group were incompatible with the one-party rule in mainland China.

In the past decades, the group had organized the commemorations on June 4 to honor those who died under China’s military carnage—making those commemorations the only large-scale public candlelight vigils on Chinese soil each year.

The assemblies always attracted as many as hundreds of thousands of people every year, until authorities banned it in 2020, citing anti-pandemic measures. Yet Beijing has seen it as one of the largest challenges to its centralized power, despite its promise of free speech regarding Hong Kong.

Police had notified the Alliance in August that it was under investigation for suspicion of collusion with foreign forces. The group denied the accusation and refused to cooperate. A Hong Kong court has to date charged three leaders of the group with subversion, a vaguely defined crime under the Beijing-imposed national security law.

The law punishes anything Beijing deems as subversion, secession, terrorism, and collusion with foreign forces with up to life in prison, as shrinking space for dissents has stoked widespread anxieties.

The group said in July that it had laid off staff members to ensure their safety and that half of its committee members had resigned.

Although the pro-Beijing government in Hong Kong has denied that there has been a crackdown on civil society, the Alliance was one of the few outspoken pro-democracy groups remaining in Hong Kong.

Many pro-democracy organizations have disbanded because of safety concerns, including the Civil Human Rights Front, the organizer of a massive anti-government rally in 2019 that attracted more than 1 million people in the city.

Nine activists were sentenced to six to 10 months imprisonment on Sept. 15 for participating in a candlelight vigil in 2020.