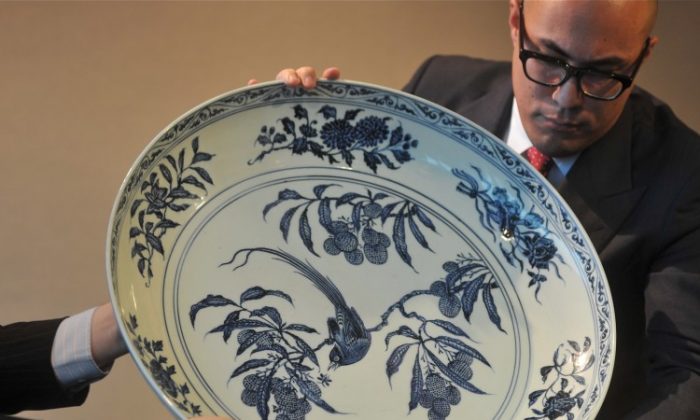 A blue-and-white 'Bird On A Lychee Branch Charger', which is expected to fetch 6.4 million to 10.3 million USD, at a press conference in Hong Kong on March 5, 2012. (Aaron Tam/AFP/Getty Images)
China

Hong Kong: The Emerging Heart of Art in Asia

Hong Kong has long been considered the financial heart of Asia. Yet the former British colony is fast becoming known for its artistic flare as well.

Currently the world’s third largest art auctioneer, behind only New York and London, Hong Kong is an attractive market for exhibitors and artists alike.

It is not surprising—Hong Kong has the fastest growing millionaire population in the world, with a staggering growth of 33 per cent reported last year, according to the World Wealth Report 2011. There are currently over 205,000 millionaire households and many are eager to enter the contemporary arts scene, not shy to spend thousands of dollars.

Since 2008 the annual art fair ART HK has more than doubled the number of exhibitor galleries, going from 100 to 260. In 2011 the event attracted a staggering 63,000 visitors—a more than three-fold increase from the 19,000 just three years earlier.

This cultural emergence has not come without a fight.

“There was a lot of scepticism from the international art scene about doing art fairs in non-traditional destinations. Hong Kong was a much harder sell,” said Magnus Renfrew, director of ART HK, according to BBC.

Since the 1950’s contemporary art has been primarily sold in Europe and USA, at popular auction houses such as Christie’s and Sotheby’s.

However, in the last decade China has emerged as a strong base for the arts scene. China is now number one in terms of Fine Art auction revenue, according to Thierry Ehrmann, founder and CEO of Artprice, world leader in art market information.

“This unprecedented news represents a turning point in the history of the global art market,” he is quoted as saying in an article from Art Market Insight.

Moreover, there were 4 Chinese artists in the top-10 ranking of global artists by auction revenue for 2010, the lowest of whom generated US$112 million (HK$869 million) during the year.

Graham Steele, the gallery’s Asia director, says the choice of Hong Kong for its first overseas venture was driven by a number of factors, including the ease of doing business in a city where there is no sales tax, and the import and export of art work is duty free.

“The energy of the city is very seductive for dealers and artists,” he says. “It’s a scene that’s about to blossom and in a really great way.”

Certainly with huge injections of infrastructure now being created around Hong Kong the city will soon be at the heart of the Asian art scene. There is the construction of M+ the West Kowloon Cultural district and its contemporary museum component, which is said to cost more the US$2.1 billion (HK$171.5 billion).

As well as the renovation of the Central Police Station heritage site to a mid-size exhibition venue (scheduled to open in 2014) and the opening of the Asia Society’s new premises in Hong Kong in early 2012, the city will shortly be home to world class cultural and exhibition venues.