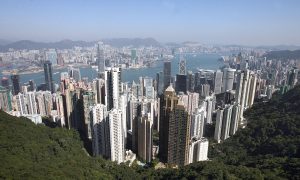 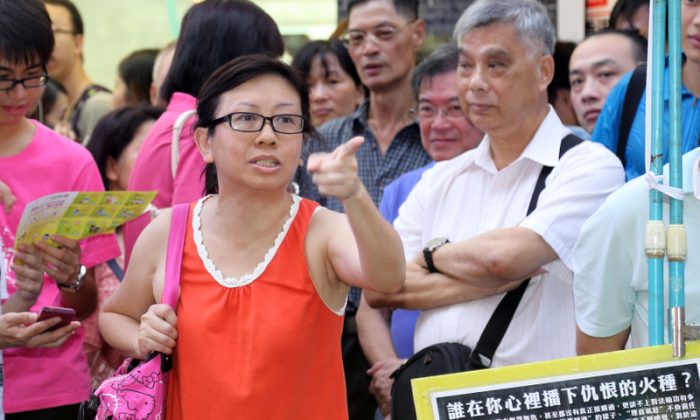 A July 14, 2013 photo of Lam Wai Sze, a Hong Kong female teacher who spoke in defense of Falun Gong. She was recorded in a video that was later spliced to show her as the aggressor, which many of Lam's supporters have called "the Chinese Communist Party's slander." (Pan Zai Shu/Epoch Times)
China

HONG KONG—A schoolteacher that upbraided Hong Kong’s police for failing to protect Falun Gong practitioners being besieged in the street on July 14 by a Chinese Communist Party front group has received an outpouring of support after pro-CCP media attacked her.

A video of Lam Wai Sze arguing with police went viral after it was posted online on July 25. However, it had been doctored and made to present the teacher as the aggressor, and was posted on the website of Oriental Sunday, a pro-Chinese Communist Party magazine in Hong Kong.

Wearing a red dress and glasses, she spoke loudly to the police in Mong Kok, a shopping district in Hong Kong, while admonishing them with her index finger. Between pauses in her statements, several in the crowd clapped in support.

At one point during her speech she said: “Don’t think I won’t say it—you’re well aware of what the Communist Party does, such as daily trafficking in organs, and killing people to peddle their organs, which everyone in the world knows about.”

Her voice rising, she said, “You police are protecting these communist bandits?” Soon after, police threatened and yelled at the teacher.

All that was deleted from the video, titled “Violent Female Teacher Shouts at Police.”

Oriental Daily included a comment with the video praising the police for “calmly dealing with the teacher,” and denouncing her.

Yet despite the campaign to attack her, when the full story emerged Lam was given a robust defense by Hong Kong people concerned about the activities of the Youth Care Association, which is widely seen as a proxy for the Chinese Communist Party in Hong Kong.

Lei Yi Ling, a freelance writer, wrote in the Apple Daily that the incident and the doctored video was “another example of the Chinese Communist Party’s methods of slander.”

The Youth Care Association is known in Hong Kong as the group responsible for blanketing the city for 10 months with banners that slandered Falun Gong in language drawn from CCP propaganda, until the association was finally forced to take the banners down in April 2013.

Since June 2012, the association has continually harassed Falun Gong practitioners, sometimes violently, in the face of which the Hong Kong police have been passive, as they were on July 14.

The Youth Care Association shares an office building and staff in Shenzhen with the 610 Office, a Party agency that oversees the persecution of Falun Gong in China, according to a Next Magazine report. The association’s leader is a Communist Party official from Jiangxi Province in mainland China.

“Hong Kong needs more teachers like Lam that teach compassion and truth, rather than communist brainwashing,” a netizen commented in a Chinese media report.

The chairman of the largest pro-democracy group in Hong Kong, the Hong Kong Alliance, Lee Cheuk Yan told the Epoch Times, “Hong Kong citizens should stand up in support of Lam and resist the Chinese Communist Party’s online slander.”

Lam’s family has also been forced to take a stand. “The Chinese Communist Party is trying to throw dirt on my daughter’s name,” said Lam Sam Sing, her father. “But even in the face of relentless pressure, and after our family’s picture was exposed online, I won’t back down. I fully support my daughter.”

“The Chinese communists aren’t as powerful as you may imagine. We just have to stand up to them,” said a radio station host, surnamed Ma, stating that despite Lam’s school having received over 900 emails denouncing her, a public event would be held every Sunday to promote freedom.

“If someone speaks up about an injustice, and then gets punished with slander, that’s not something Hong Kong people can accept,” called out one member of Orchid Gardening, an anti-communist group in Hong Kong, at an impromptu street protest at Mong Kok in support of the teacher. He added, “That’s the work of the Chinese Communist Party.”