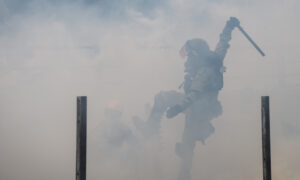 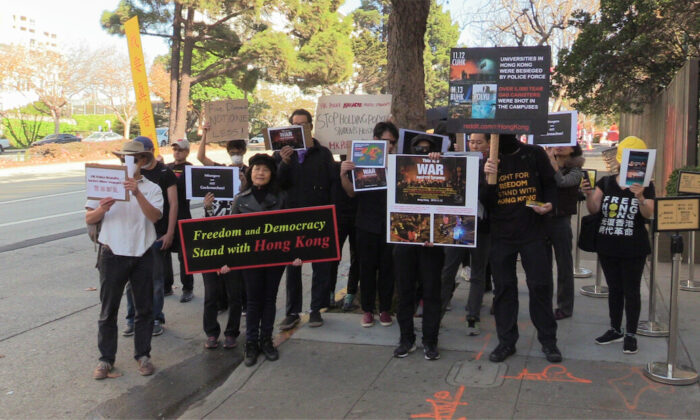 SAN FRANCISCO—A group of students and residents living in the San Francisco Bay Area gathered in front of the Chinese Consulate on Nov. 18 urging the Chinese communist regime and Hong Kong authorities to stop the violent crackdown on the pro-democracy protests in Hong Kong.

The demonstration took place largely because of growing concerns for the safety of student protesters at Hong Kong’s Polytechnic University (PolyU). The university campus is currently under siege by the police force.

The standoff between students and police at PolyU has been ongoing since the evening of the Nov. 16. Growing violence has been reported from both sides.

During the demonstration at the consulate, a few students from UC Davis read a joint statement signed by students, alumni, and faculty from 54 American universities and colleges, “calling upon the United States government to take all necessary economic and diplomatic steps to avert potential bloodshed.”

The statement also urged Hong Kong’s Authority to “call off violent crackdowns on pro-democracy protesters, and answer the remaining four demands put forth by the protesters.”

The statement stated that there have been “a shocking number of unexplained disappearances, ‘suicides’ and police rape” in Hong Kong in the past several weeks, and the violence inflicted by the police against the pro-democracy protesters “has escalated to unprecedented levels.”

According to reports from Chinese media, most of the student protesters have left the university campus, but there were still more than 200 students who decided to stay to continue the protest.

The Hong Kong police made several requests to the besieged students on the campus to surrender. The students who walked out of the campus were either arrested or had their identities recorded.

Concerns have been growing about the potential escalation into another Tiananmen Square Massacre. According to reports from Chinese media, the police officers are equipped with AR-15 rifles, and with authorization to use lethal force.

A Chinese media outlet released a video on Facebook of police officers marching toward the university campus while shouting, “I want Six-Fourth to repeat!” The word, “Six-Fourth” in Chinese, is a short name for the Tiananmen Square Massacre, which took place on June 4, 1989.

“We simply want Chinese government to back off from Hong Kong affairs,” said Joyce Yeung, who led the demonstration in front of the Chinese Consulate. Yeung said that Hong Kong’s affairs should be resolved according to the Basic Law, which was based on the concept of one country with two political systems.

Yeung criticized the Chinese regime for its endorsement of using tear gas and other violent methods to suppress the protesters. “As the situation been escalated, we worried to see that a Tiananmen Square [Massacre] 2.0 to take place in Hong Kong,” Yeung said.

Yeung is a former PolyU student, and has been living in the San Francisco Bay Area for about 10 years. She said many protesters who joined the demonstration at the consulate have family and friends in Hong Kong.

The Hong Kong authority is dealing with the protesters in the wrong way, she said, and “it only angers more people by silencing them in a brutal way.”

She also said Hong Kong’s Chief Executive Carrie Lam isn’t capable of handling the current situation. If the Chinese regime endorses Lam, “it shows that they are equally incapable of governing the country.”

Rick Weyrich was one of few Caucasian protesters in the demonstration. He held a Chinese banner that read, “I want universal suffrage.”

Weyrich is an American artist, and his company has an office in Hong Kong. He has traveled back and forth between the Bay Area and Hong Kong many times.

He said he became angry watching Hong Kong’s pro-Beijing legislator. “I don’t understand why these people don’t wake up to see what is really going on,” he said.

“I consider Xi Jinping as the new Stalin,” Weyrich said, and demanded that the U.S. Senate “pass the Hong Kong Democracy Act today.”

Helena Li, originally from mainland China, joined the demonstration. She was a college instructor before coming to the United States. She has been living in the Bay Area for nine years.

“All Hong Kong’s protesters have asked are just the rights that Chinese government originally promised to them,” Li said. She told The Epoch Times that she’s been very supportive of the pro-democracy activities organized by local groups supporting Hong Kong.