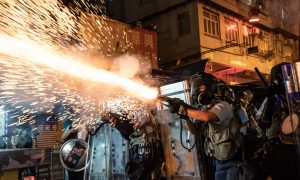 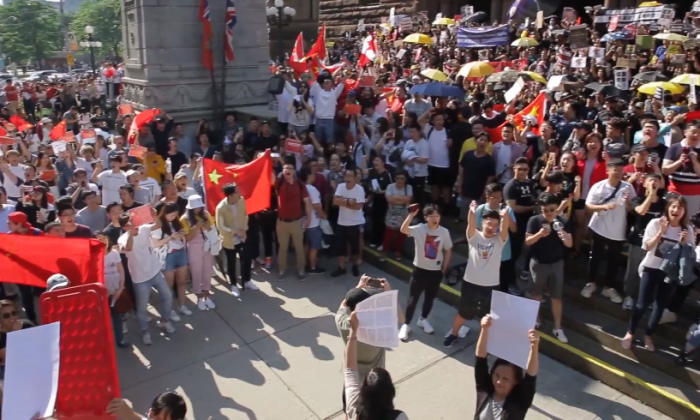 A rally in Toronto on the weekend organized to show support for the pro-democracy movement in Hong Kong changed course when a rowdy group of pro-Beijing counter-protesters showed up.

On Aug. 17, hundreds of people gathered at Old City Hall in downtown Toronto to march in a show of solidarity with the people of Hong Kong, who began protesting in early June over an extradition bill that could have resulted in criminal suspects being sent to China.

The march was to begin at Old City Hall and circle around Eaton Centre on the busy streets of downtown. But the hundreds of participants gathered at the designated meeting point were soon blocked from moving forward by a large group of pro-Beijing demonstrators bearing red Chinese flags and signs.

The group attempted to drown out the Hong Kong supporters by loudly singing the Chinese national anthem and chanting phrases like “one China” and “shame on you.”

The Hong Kong pro-democracy supporters responded by singing “O Canada,” accompanied by cries of “freedom” and “no violence.”

The protest supporting Hong Kong also took place in Vancouver, and in both cities, some members of the pro-Beijing group arrived in pricey luxury sports cars draped with the Chinese flag. In an effort to disrupt the event and show their support for the Chinese regime, the drivers noisily revved their engines and waved flags out the car windows.

4 Lamborghinis have shown up at the corner of Bay and Queen, revving their engines with their drivers holding Chinese flags out the window. This seems organized. pic.twitter.com/Jdo0fxOuKL

Gloria Fung, a Hong Kong activist who led the event in Toronto, told Global News that the presence of the counter-protesters was an “intimidation tactic.”

Fung noted that while the rally in support of Hong Kong was a registered event approved by the government, the pro-Beijing group didn’t have a permit for their demonstration. She said the aim of the group was to “jeopardize” the freedom of expression of the participants involved in the rally.

The clash between the two groups, which included at least one brawl and much yelling, eventually resulted in the Toronto Police Service showing up in an attempt to control the situation.

Pro-China protestors chant “one China” across from supporters of Hong Kong chanting “keep up Hong Kong”. March to support HK delayed due to clashes. @CTVToronto pic.twitter.com/8EiUfoZtgx

One Chinese witness, who wished to remain anonymous, said in an interview that the pro-China group was “extremely loud” and initiated a great deal of conflict with the relatively more peaceful Hong Kong supporters.

“They spoke in a very provoking way,” she recalled. “They said things like, ‘all of Hong Kong’s finances are paid for by [mainland China], so you should call us your father.'”

The Toronto rally was part of a global event created by the activist Facebook group “Fight for Freedom, Stand with Hong Kong,” in which people in 37 cities across the world—including major metropolises like Washington, Paris, London and Tokyo—rallied in support of the Hong Kong protesters.

The Facebook group wrote in a post that the purpose of the event was to call for “the UK to declare a Chinese breach of the Sino-British Joint Declaration,” as well as for “the US Congress and the UK Parliament to legislate Magnitsky-style sanctions upon the persons responsible for [or] complicit in the suppression of rights and freedoms in Hong Kong.”

“Together, we will reclaim what rightfully belongs to the people of Hong Kong,” the post stated. “We stand firm with each and every Hongkonger through this hardship and remain steadfast to the principle of a leaderless movement.”

Among other demands, protesters want the complete withdrawal of the extradition bill, which is currently suspended; the resignation of Hong Kong leader Carrie Lam; an independent investigation into police brutality during the protests; and all charges against protesters dropped.