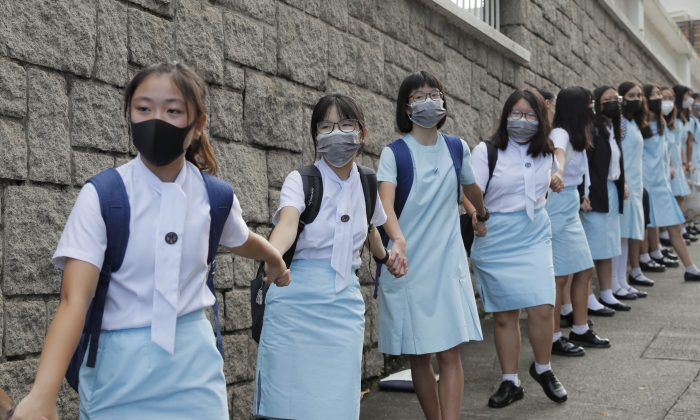 Hong Kong authorities are aiming to strengthen “national identity” among school children through a new curriculum issued on Tuesday.

Branded as “brainwashing” by critics, the 89-page revised framework on civic values, titled the “Values Education Curriculum Framework,” was issued to all schools in the city.

It replaces an eight-page “Moral and Civic Education Curriculum Framework” that was issued in 2008.

Hong Kong’s Education Bureau said in the document that pupils should under the new rules “correctly understand” Chinese history, the mainland’s constitution, culture and values, and respect China’s national symbols, including the flag.

“After Hong Kong went through large-scale social turmoil, we have to strengthen national identity education work,” the bureau said, alluding to mass pro-democracy protests in the city during 2019-2020.

School and university students were at the forefront of many past protest movements against Beijing’s encroachments upon Hong Kong freedoms since the former British colony was returned to China in 1997.

The new revised curriculum will “cultivate a sense of national identity among students … and help them understand their responsibility, as a Chinese, to protect their family and the country,” it states.

The new guidelines lacks its predecessor’s expectation that students understand the importance of human rights, reported the SCMP.

The framework also includes examples for teachers to follow, such as a suggestion for teachers to play the revolutionary ballad The East Is Red during one subject, reported the SCMP. The song was popular during China’s disastrous Cultural Revolution, 1966 – 1976.

The education sector in Hong Kong has become a target of “rectification” since the Chinese Communist Party (CCP) forcibly imposed its draconian National Security Law on the city mid-last year.

The law punishes anything Beijing regards as secession, subversion, terrorism, or collusion with foreign forces with up to life in prison.

More than 150 people, including many opposition politicians, have been arrested for endangering national security over the past 16 months, while schools, churches, libraries, booksellers, and film-makers have all been subject to tighter scrutiny.

Since the introduction of the national security law, at least six liberal academics have been forced from their university jobs, according to Reuters, while student unions have been disbanded or ousted from campuses and student leaders arrested.

The law itself stipulates that national security must be taught in schools and universities.

Starting next year, universities will also be required to raise China’s national flag daily, according to education secretary Yeung.

Schools will also be required to do the same, as will be singing the national anthem, on a weekly basis as of next year

Jan Currie, a professor of education at Australia’s Murdoch University, described the flag and anthem law for schools as “indoctrination.”

“The policy … is the start of trying to make them [students] Chinese citizens in a one-China nation,” Currie told VOA in an email.

“It is much like what happened in Eastern Europe in the aftermath of WWII, when the Soviets occupied those countries and began to form the youth into communist-believing children and young adults,” Currie said.

“It is a form of soft indoctrination that begins with things like having the children identify with the flag and the national anthem, and then will encroach on the curriculum to introduce Marxism-Leninism-Maoism,” she said.