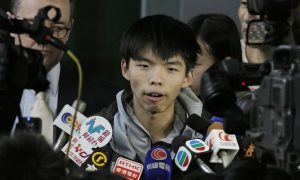 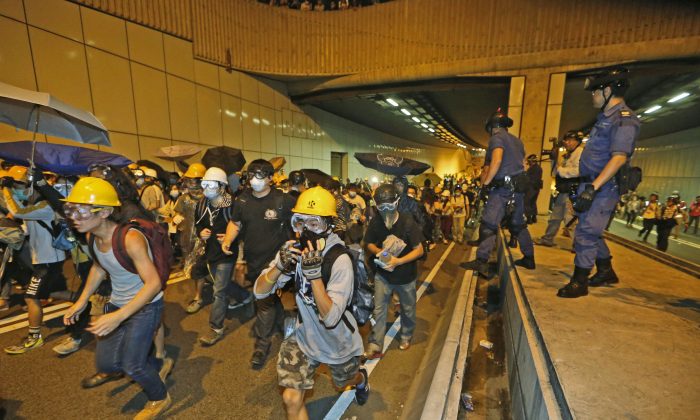 Pro-democracy protesters run away from police on the main road outside the government headquarters in Hong Kong Sunday, Nov.30, 2014. Hundreds of pro-democracy protesters faced off with Hong Kong police late Sunday, stepping up their movement for genuine democratic reforms after being camped out on the city's streets for more than two months. (AP Photo/Kin Cheung)
China

HONG KONG—Pro-democracy protesters clashed with police early Monday as they tried to surround Hong Kong government headquarters, stepping up their movement for genuine democratic reforms after camping out on the city’s streets for more than two months.

Repeating scenes that have become familiar since the movement began in late September, protesters carrying umbrellas — which have become symbols of the pro-democracy movement — battled police armed with pepper spray, batons and riot shields.

After student leaders told a big crowd rallying Sunday evening at the main protest site outside government headquarters that they would escalate their campaign, hundreds of protesters pushed past police lines on the other side of the complex from the protest site. They blocked traffic on a main road, but were stopped by police barricades from going down a side road to Chief Executive Leung Chun-Ying’s office.

The protesters, many wearing surgical masks, hard hats and safety goggles and chanting “I want true democracy,” said they wanted to occupy the road to prevent Leung and other government officials from getting to work in the morning.

At one point, police charged the crowd, aggressively pushing demonstrators back with pepper spray and batons, after some protesters started pelting them with water bottles and other objects. They later fell back, letting demonstrators re-occupy the road.

Police Senior Superintendent Tsui Wai-hung said 40 protesters had been arrested, adding that authorities would not let the road, a major thoroughfare, remain blocked.

“We will open up this road,” he told reporters.

Protesters said they were taking action to force a response from Hong Kong’s government, which has made little effort to address their demands that it scrap a plan by China’s Communist leaders to use a panel of Beijing-friendly elites to screen candidates for Hong Kong’s leader in inaugural 2017 elections.

The federation is one of two students groups that have played important roles in organizing the protest movement in the former British colony.

“I really want to have real elections for Hong Kong because I don’t want the Chinese government to control us, our minds, anything,” said protester Ernie Kwok, 21, a maintenance worker and part-time student.

Authorities last week used an aggressive operation to clear out the protest camp on the busy streets of Hong Kong’s crowded Mong Kok district, one of three protest zones around the semiautonomous city.

In Britain, a lawmakers’ committee said the Chinese Embassy had warned that its members would be refused entry if they tried to go ahead with a visit to Hong Kong as part of an inquiry into the city’s relations with the U.K. since the handover of sovereignty to China in 1997.

Richard Ottaway, chairman of Parliament’s committee on foreign affairs, said the Chinese authorities were acting in an “overtly confrontational manner.” He said he would seek an emergency parliamentary debate on the development.

The Foreign Office called the Chinese message to the lawmakers “regrettable” and said it has expressed its position to the Chinese side “at the most senior levels.”