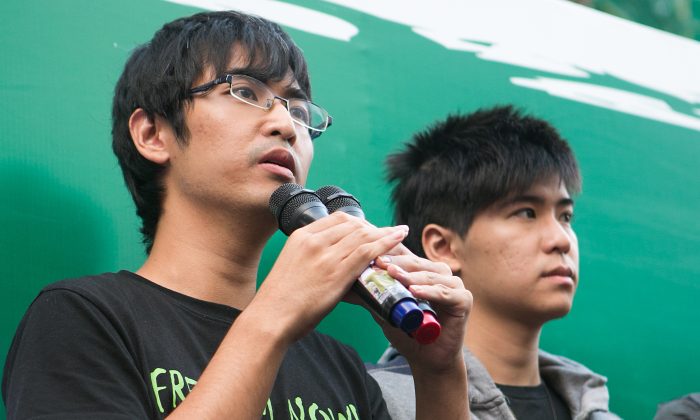 Alex Chow, secretary general of the Hong Kong Federation of Students, speaks at a press conference in the Central District of Hong Kong on Oct. 9, 2014. The HKFS recently confirmed that it plans on a trip to Beijing to meet top Party leaders later in the month. (Benjamin Chasteen/Epoch Times)
China

Hong Kong Students Hope for Audience in Beijing After APEC

HONG KONG—The Hong Kong Federation of Students, the group that has taken the most prominent role in representing the largely leaderless umbrella movement here, has officially confirmed that it plans on a trip to Beijing to directly discuss with top Chinese Communist Party officials the Hong Kong people’s hopes for democracy.

But they say they will go through an intermediary—suggested in newspaper reports to be the former Hong Kong chief executive C.Y. Tung—and will wait until the Asia Pacific Economic Cooperation, a large international confab, is over. APEC is being held in Beijing and will run from Nov. 9 to 11.

Reports that the HKFS had planned, or hoped, to meet with top Party leaders emerged last week in the pro-democracy Hong Kong newspaper Apple Daily. These were later disclaimed, and then modified to say that the students were unsure when they would go.

In interviews on Friday with Apple Daily  and Ming Pao, Alex Chow, the secretary general of the HKFS, and Eason Chung, the general secretary, the group made clear that it’s plans were official.

Pro-government lawmakers in Hong Kong had previously described the announcement that students would go to Beijing as a “provocation.” Subsequently, the HKFS seemed to alter its strategy slightly—delaying the timing, and finding a trusted intermediary.

C.Y. Tung was the candidate they suggested. Tung is a veteran Communist Party figure who regularly represents the Party and its interests overseas, and who was Hong Kong’s first chief executive after Britain handed the colony to the People’s Republic of China in 1997.

He was dismissed after half a million people took to the streets in 2003, protesting an attempt to implement the so-called Article 23 legislation—an anti-sedition law that would have banned criticism of the Communist Party, and suppressed key freedoms that Hongkongers consider their basic rights.

The students said they would send about 10 people in the delegation.

Alex Chow told Ming Pao that if police don’t initiate a violent clearance, sufficient to keep protesters from coming back, and if the trip to Beijing produces no outcome, then the occupation could continue until as long as June next year.

“The timetable in Hong Kong is that the Legislative Council will decide on the political reform proposal from March to April, and May to June. Everyone agrees that until there’s a decision, the occupation won’t simply retreat for no reason.”

At that time Hong Kong’s Legislative Council, or LegCo, will have the opportunity to accept or reject the decision by the Standing Committee of the National People’s Congress, China’s rubber-stamp legislature, on the electoral process that has frustrated so many in Hong Kong.

That NPC decision, issued on Aug. 31, said that a nominating committee (which is effectively controlled by Beijing) would present the public with two or three candidates for the election of the chief executive.

Some protesters have compared this to being asked to choose which rotten apple they would like to eat.

In late September student groups staged a class boycott in an attempt to begin a dialogue with the government over this decision. Democracy advocates in Hong Kong said they had assumed that they would be given true universal suffrage in 2017, rather than what they consider this, highly restricted kind.

An unexpected twist in the story also occurred on Friday, when Regina Ip, a pro-government lawmaker in Hong Kong, said that she could also help the students find the right channel to go through to get an audience with the central government. She remarked that C.Y. Tung was a busy man, and she might be able to help.

Eason Chung, of the HKFS, remarked on the change of tune in the interview with Ming Pao. Previously the idea of Hong Kong students meeting directly with Beijing leaders was dismissed and mocked by establishment lawmakers. “Now they want to be the middlemen. We’ll wait and see.”