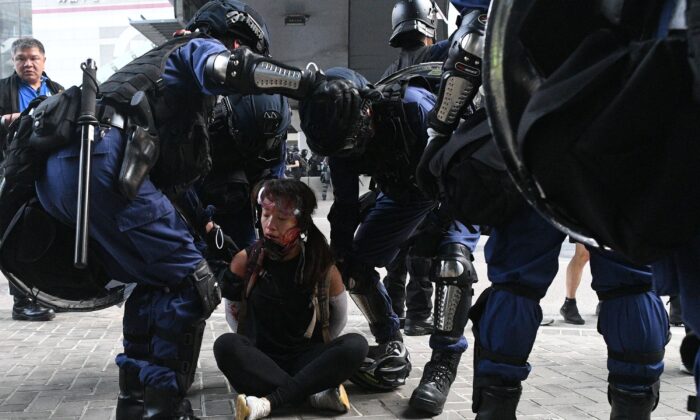 A Hong Kong university student became the first protester to publicly accuse police of sexual assault, waiving anonymity, during the ongoing pro-democracy movement in the city.

Sonia Ng, a student majoring in early childhood education at the Chinese University of Hong Kong (CUHK), made the accusation during a town hall style meeting with the university’s chancellors on Oct. 10.

“They shouted at me at 2 a.m. and told me to shut up, then cuffed my hands and sent me to … pitch-black body search room,” Ng said.

“They insulted you, beat you up, and sexually assault you as they pleased, and you can’t fight back,” she said in footage of the event that has since gone viral.

Hong Kong police have faced mounting pressure over allegations of excessive use of force, torture, and sexual violence during the arrest and detention of protesters. Until Ng stepped forward, all those who publicly accused police of sexual violence had remained anonymous.

Hours after Ng made the accusations, police in a statement on Oct. 11 said they had launched an investigation but haven’t been able to get in touch with the student, who had yet to make a formal complaint.

Ng was one of the 32 CUHK students arrested since June for their involvement in the protests against Beijing’s encroachment, according to pro-vice-chancellor Dennis Ng Kee-pui.

She said that her arrest took place on Aug. 31 at Prince Edward metro station, and she was later sent to Princess Margaret Hospital, Kwai Chung Police Station, and San Uk Ling Detention Center, a holding center close to the border with mainland China. Activists and rights groups have accused police of abusing and torturing detained protesters at the center.

During a radio interview on Friday, Ng clarified that the incident took place at Kwai Chung Police Station.

Ng said during the gathering that she was “far from the only victim” of police’s sexual abuse.

“Other arrestees were sexually abused by more than one officer regardless of their gender,” she said, adding that the police treated them as “a piece of meat on the cutting board, to be chopped at will.”

After their arrest, the police would take away their phones and switch them off, she said.

During the six-minute speech, Ng took off her mask and confronted the vice-chancellor, Rocky Tuan, asking if he was willing to “stand with students” and condemn police brutality toward the arrested protesters.

“I am willing to be courageous and take off my mask, would you also be brave and support us?” she asked.

Tuan replied that he “will condemn all violence,” but faced a string of tough questions by students about the level of support provided by the university over the four months of protests.

CUHK staff, alumni, and students issued a statement to support Ng following her speech on Thursday.

“Sonia, you are not alone. We stand with you in the pursuit of justice,” the statement read while calling for the school officials to take a stand on the issue.

“It breaks our heart to know that our students have suffered from such cruel treatment,” it said.

Ng told Hong Kong media on Oct. 11 that she was willing to go public because she is estranged from her family and thus has less to worry about. She added that after her speech, she received intimidating phone calls from phone numbers from mainland China.

Ng first revealed her experience at Kwai Chung police bureau under the alias Ms. Lung during a Sept. 4 press conference. Wearing dark sunglasses and a black mask, she told reporters that a male police officer hit her on the breast. She also claimed that the police didn’t allow her to close the restroom door and watched her using the toilet.

Nearly 2,400 people have been arrested over the course of the pro-democracy movement, of which 750—or about a third—were under 18 years old. Just over 100 were under the age of 16, according to a Thursday police press briefing.