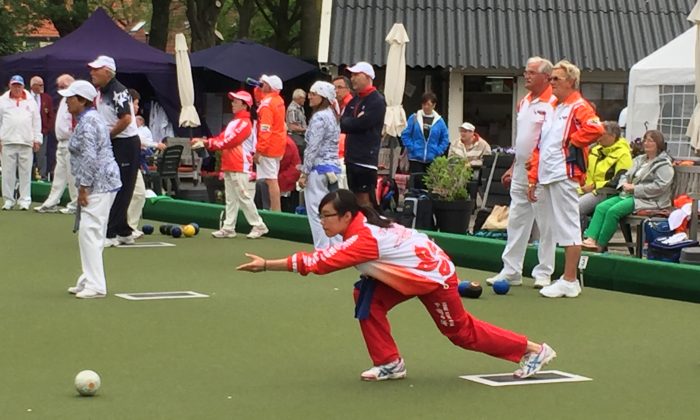 The Hong Kong lawn bowls team registered their best results at the Dutch Open last weekend, May 14, winning a gold in the ladies pairs, a silver in the men’s pairs and a bronze at the mixed fours.

The competition, which has been organized every two years since 2012, was held at Ons Kinnehim Bowls Club in Haarlem, Holland, from May 8 to 14.  This year the 11 participating teams were from Argentina, England, Hong Kong, Isle of Man, Jersey, USA and the host country Netherlands.

Hong Kong sent two teams to the event, one from the senior squad and the other from the youth team.  Representing the senior team included veteran David Tso, who last played for Hong Kong at the Asia Pacific Championship back in 1999, Candy Ng and debutant Kenny Tam and Priscilla Lam.  The youth team consisted of the familiar faces of Jason Choi, James Tang, Amy Choi and Gloria Ha.

The 11 teams each played against five teams, which were picked randomly, and the top four teams qualified for the semi-finals.

The two ladies teams performed well throughout.  They both lost to teams from the host nation in the roundrobin but met each other in the semi-finals.  The girl’s team performed better in the match and edged out their senior 15:14 to progress into the final against the USA.

In the final against Kottia Spangler and Dee McSpaarran, Choi and Ha were never troubled in the progression.  The Hong Kong girls opened up a lead of five shots after three ends and cruised to a 21:12 victory.

The youth team of Jason Choi and James Tang won all their games in the roundrobin stage and stormed into the final after beating the England team 18:0 in the semi-final.  They faced Stephan Kirkwood and Robert Maher from Ireland in the final and everything looked rosy until the 16th end when they were leading 14:12.  The Irish pulled one back in the following end and held two shots in the last end.  Choi tried to trail the jack with his last bowl but missed by 1 cm.  The game finished 14:15 and Ireland took the gold.

While praising the youth team for their outstanding performance throughout, team coach Danny Ho also believed that the good results were partly due to the fact that some strong nations did not participate, “Scotland, who won a number of golds in the last event, and Canada were not among the contestant so the competition was not as strong as usual.

“The four kids played really well throughout.  Amy was playing skip at international level for the first time but displayed the kind of maturity that not many other players demonstrated in Hong Kong.  She did everything requested by the coach and it is important to play as a team during international competition.  Jason also did well and the execution of skip shots were particularly good.

“For the senior players, they need to work on the consistency so as to move to the next level.  Overall the Hong Kong team performance has impressed all participants and this is good for the image of lawn bowls in Hong Kong,” concluded Ho.

Premier League continues this Saturday May 21 starting at 2:30pm at all greens in Hong Kong. On Sunday May 22, round 2 of the National Triples are scheduled at 10am for women and 3pm for men.