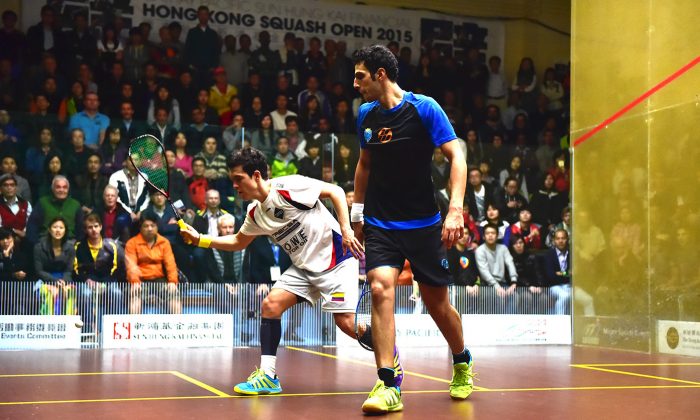 This all action match between Columbian, Miguel Angel Rodriguez and Omar Mossad of Egypt, seeded 4 and 6 respectively. Rodriguez looked well in control in the early games winning the first two 11-3, 11-3 but Mossad talented and tenacious as ever clawed his way to back into the match taking the next two 11-9, 11-9 to set up an awsome 5th game decider. Mossad, at 10-5 down was facing defeat but gradually pulled back to 10-10 and went on to win the decider 13-11. He will meet No1 seed Mohamed Elshorbagy in today's semi-final. (Bill Cox/Epoch Times)
HK Sports

Quarter Finals day is probably the most satisfying for sports lovers as 8-top level matches are on display during the afternoon and evening sessions – a feast for squash lovers. Hong Kong open attracts all of the world’s top players and at quarter finals stage the men’s and women’s top talent is on display.

The Women’s line up for the semi-finals was Raneem El Weilily of Egypt (No 1 seed) against Amanda Sobhy of America (9); Nouran Gohar of Egypt against Laura Massaro (3) of England; Camille Serme of France (4) against Omneya Abdel Kawy of Egypt and Joelle King (unseeded) against Nicol David (2).

In the first match of the day Soby looked a bit nervous and had a rather disappointing match making many unforced errors. El Weilily polished off the 11-8, 11-5, 11-8 win in just 22 minutes. David although relegated to No.2 seed for the first time in this tournament for many years also showed her class beating, King a strong but unseeded New Zealander, in three straight games 11-6, 11-4, 11-3.

Laura Massaro of England had a tougher match against a fully focused and talented Gohar but as the game progressed Massaro became more dominant winning in 4-games 11-5, 6-11, 11-8, 11-6. As one might expect the match between the 4th and 5th seeds, Serme and Abdel Kawy had many good close rallies but Abdel Kawy showed good solid play to push through to the semis.

The semis line-up which take place at the Hong Kong Squash Centre, today Saturday Dec 5 will be Raneem El Weiliy against Laura Massaro and Abdel Kawy against Nicol David.

A strong quarter final line-up for the men of Omar Modsad of Egypt (seeded 6) against the talented and highly entertaining individual style of Columbian Miguel Angel Rodrigues (4); Mohamed Elshorbagy (1) against Mathieu Castagnet (8); Tarek Momen of Egypt (7) against Nick Matthew of England and Gregory Gaultier of France (3) playing Cameron Pilley of Australia (unseeded)..

So the line-up for the semi-finals is an all Egyptian class between Mohamed Elshorbagy against Omar Mossad while Nick Matthew will face Cameron Pilley.