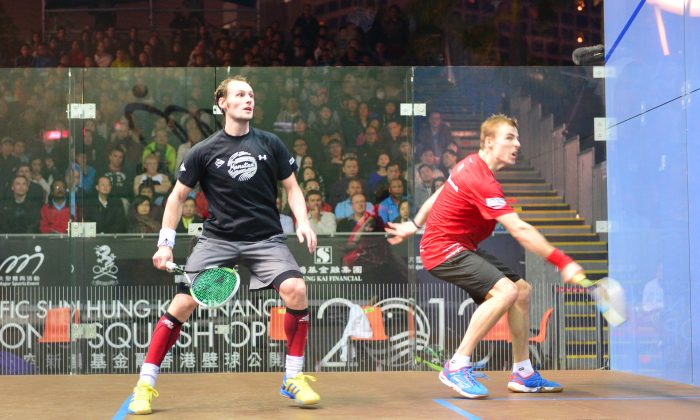 The Men’s and Women’s draw for the Cathay Pacific Sun Hung Kai Financial Hong Kong Open 2014 to be played between Aug 26 and 31 was made on Wednesday July 23. The tournament has again attracted most of the world’s top men and women squash players.

The men’s current top player, 31-years-old Frenchman, Gregory Gaultier, is no stranger to Hong Kong having played in the tournament many times and reached no less than 4-consecutive Hong Kong Open finals between 2007 and 2010.

Last year Gaultier was beaten in the Semi-final by Nick Matthew of England, but Gaultier hit back to beat Matthew to win his second British Open in May this year. Gaultier has been at the very top level of world squash since 2007.

But many of the other contestants also have high pedigree: Ramy Ashour (seeded 3), James Willstrop (4) and Karim Darwish (7) have all occupied the World No.1 spot and are regular competitors in the Hong Kong Open.

Ashour and Willstrop have both won the Hong Kong Open—Ashour twice in 2005 and 2009 and Willstrop in 2011. Two youngsters the No.2 seed, Mohamed Elshorbagy 23-years old and is still establishing has credentials at the top level. Last year’s finalist Borja Golan seeded-5 that defeated Willstrop in the Semi-finals last year could also be a threat.

Defending Champion Nick Matthew of England is conspicuous by his absence particularly as he is currently leading the England Team at the Commonwealth Games in Glasgow. But we understand he has decided not to come as he is expecting a happy family event at that time.

Another past winner, Amr Shabana currently world ranked No.5 has 4-Hong Kong Open wins to his credit (2006 to -9) is also not in the draw this year.

Hong Kong’s No.1 men’s player Max Lee ranked 26 in the world has automatic entry in the competition for the first time. He will play No.8 seed Daryl Selby of England in the first round. Yip Tsz Fung also of Hong Kong has wild-card entry into the Main Draw and will play Simon Rosner of Germany in the first round.

Women
Eight times World Champion and 8-times Hong Kong Open Champion, Nicol David is again No.1 seed in the Hong Kong Open. She is currently leading the Malaysian team at the British Commonwealth Games in Glasgow.

World No.2, Laura Massaro of England (seeded 2) is also currently playing in Glasgow.

Last year’s loosing finalist Egyptian Raneem El Welily is absent from the draw this year, but all of the other top ranked women have entered the tournament.

Hong Kong’s Annie Au seeded No.8 is drawn against Heba El Sherbini of Egypt in the first round and Joey Chan currently ranked 22 in the world also has a direct entry to the main draw. Chan has a tough first match against Indian Dipika Pallikal (ranked 10), but whoever wins this game is likely to be faced with World Champion Nicol David in the second round.

Hong Kong’s Tong Tsz Wing has a wild-card entry to the main draw and will meet No.6 seed Low Wee Wern of Malaysia in the first round.

Amanda Soby (ranked 13) of the United States, although not seeded, is recognised as a player of high calibre. She has won twice in Hong Kong first in the Buler Squash Challenge in 2013 and more recently in May this year she won the Hong Kong Football Club 25 competition by beating Rachael Grinham of Australia in the final.

Soby, a strong, highly talented player still studying at Harvard University is balancing her time between studies and appearances in top level squash events until she graduates next year. This will be her first appearance at the Hong Kong Open and she is certainly a player to watch.