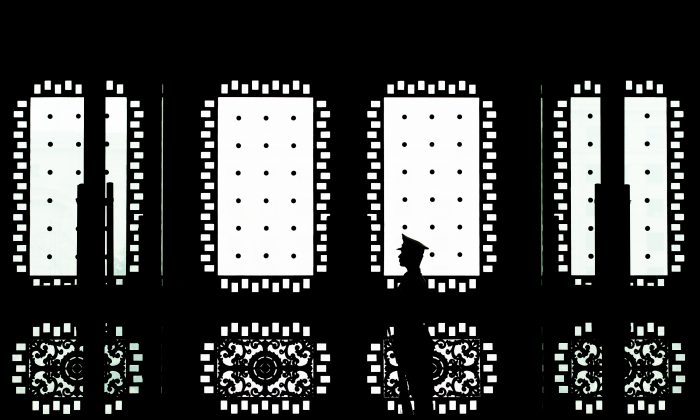 A Chinese soldier stands guard at the main entrance door of the Bayi building in Beijing on April 23, 2013. (Andy Wong-Pool/Getty Images)
Chinese Regime

Chinese military officials are currently being investigated for corruption as part of a greater political purge.

The Information Center for Human Rights and Democracy, a human rights group based in Hong Kong, first published a post online noting that 120 high-ranking officials within China’s military are currently under investigation.

On Aug. 1, marked by Beijing as the founding day of the People’s Liberation Army and usually celebrated with a military parade, four officers were set to be promoted to become generals. But due to the ongoing anti-corruption investigations, their promotions were canceled, according to the center.

Later on Oct. 20, the center posted an update noting that the investigations have caused a furor within the military and that new army recruits are constantly asking questions about the current situation during “political study” classes.

There were previous hints that such a purge was in the making. Back in August, after the secretive Beidaihe meeting among senior Communist Party leadership concluded, state broadcaster CCTV aired a segment about Chinese leader Xi Jinping’s appearance at a Party meeting for the Central Military Commission (CMC), a powerful organ at the apex of the Party that controls the military. As head of the Chinese Communist Party, Xi also serves as chair of the CMC.

At the meeting, Xi emphasized solidifying the central authorities’ control of the military, expressing “absolute loyalty” to the CMC, and getting rid of corruption, according to the CCTV report that aired on August 19.

Throughout August, Hong Kong media, citing insider sources, named several high-level military officials who had been purged or detained. Many of them had connections to Zhang Yang and Fang Fenghui. Zhang was a former top general and member of the CMC who was reported to have killed himself last November while under investigation for bribery crimes. Fang was also a former CMC member, in charge of orchestrating China’s military parades. In January, the Chinese regime announced that Fang would be prosecuted for bribery.

Aside from their corruption, their chief crime was being close associates of Guo Boxiong, a powerful military official and key figure in the Party faction opposed to Xi’s leadership. This group is known as the Jiang faction, for supporting former Party leader Jiang Zemin.

After coming to power in 2012, Xi kickstarted a sweeping anti-corruption campaign to rid the Party of misbehaving officials—mostly Jiang faction figures.

Jiang had developed a powerful hold over the military during his rule from 1989 to 2002. Guo enabled Jiang to remain head of the CMC until 2004, though Jiang had already stepped down from the Party leader role and Hu Jintao became the next leader. Guo was purged and sentenced to life imprisonment in 2016.

Fang was Guo’s subordinate during the late 1990s and became one of his chief allies.

To rid the military of Jiang’s influence, Xi also initiated reforms within the ranks, reorganizing its structure and shrinking the size of the CMC from nine to seven members in order to better concentrate power.

The current purge could be seen as a renewed effort to rid the military of Fang, Zhang, and Guo’s influence.

Indeed, most recently, on Oct. 16, the Chinese regime announced that Zhang—posthumously—and Fang would be expelled from the Communist Party and stripped of their ranks.

The announcement had come with a harsh admonishment of the two former generals, calling them “disloyal and dishonest, two-faced and double-dealing, having degenerated politically.” Those are typical euphemisms for engaging in factional politics.

After the announcement, many localities and Party organs released statements of their own, expressing support for the central authorities’ handling of Fang’s case and “Xi as the core of the Party.” The fervent vocal expressions of loyalty to Xi indicated the Party felt anxious about appearing disloyal.

An Oct. 22 report by Hong Kong newspaper Ming Pao named Tang Guoqing, a deputy political commissar within the Army Rocket Force, as the latest top general to be purged.

The report noted that back in June, the military held training classes at the National Defense University in Beijing for officers in charge of “discipline inspection”—the name of the Party’s internal anti-corruption watchdog. The classes reported a significant increase in attendees than in prior years, according to the Ming Pao report.