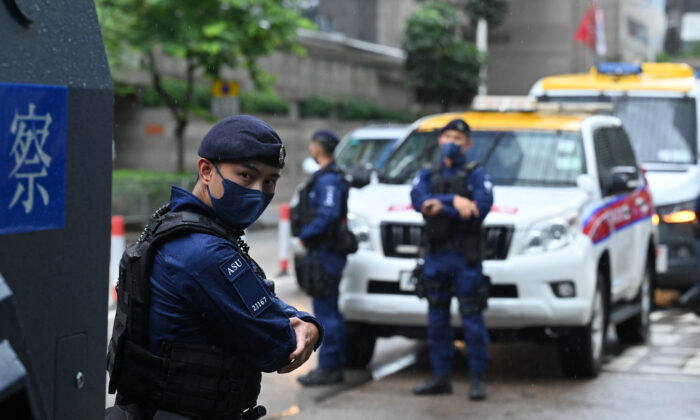 A special unit of the Hong Kong police provides security in the city's Wanchai district, as Chinese leader Xi Jinping arrives in Hong Kong to attend celebrations marking the 25th anniversary of the city's handover from Britain to China, on June 30, 2022. (Peter Parks/AFP via Getty Images)
HK Current Affairs

Shortly after the arrest, police said the two male administrators, aged 28 and 29, “were suspected of publishing posts to disseminate seditious messages that promoted feelings of ill will and enmity between different classes of Hong Kong’s population.”

Local media soon identified them as administrators of a Facebook page known as “Civil Servants Secrets,” which has repeatedly exposed problems within the Hong Kong government.

Before the arrests, police said they had initiated investigations on seven men—including the two administrators—aged between 28 and 43, and conducted searches at their residences and offices with a court warrant. Some communication devices were seized, the police department said.

Of the remaining five, who are all ambulancemen hired by the Fire Services Department, two were eventually arrested for fraud.

In the past, “Civil Servants Secrets” allowed people to anonymously reveal the inside stories of Hong Kong government departments and complain about injustice and dissatisfaction, prompting the relevant departments to make responses and improvements to address public concerns, including a recent controversy over the use of Chinese-made painkillers and antibiotics by the city’s Health Authority.