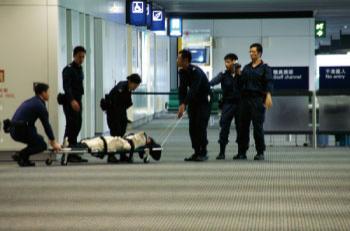 For local citizens as well as for outsiders, dealing with the Immigration Department of Hong Kong is almost an inevitable. Birth and death registrations, entering and exiting Hong Kong, and marriage registrations are just a few of the department’s services.

The department has been known for high efficiency. For example, it takes only four weeks to approve a foreign art group’s application to perform in Hong Kong—in almost all cases, that is.

Actually, Shen Yun Performing Arts might be the only group that waited for more than 17 weeks for its staff’s visa approvals, and it was informed only three days before the company’s scheduled flight to Hong Kong that the entry visas of six core staff members were denied.

The Immigration Department contended that the staff members—all key production personnel—could be replaced by local laborers. Some people believe that the visa refusal was ordered by Beijing—the result of a longstanding grudge Beijing has held against Shen Yun since stage performances include dance pieces depicting China’s persecution of Falun Gong, a spiritual practice that attracted over 100 million believers in China before it was outlawed by Jiang Zemin in 1999.

Freedom to Perform in HK in Jeopardy

It was not only Shen Yun’s rights which were violated—the rights of the tens of thousands who purchased tickets to Shen Yun’s shows were also trampled. Amy, who came from the U.S., planned to watch the show with nine of her family members. They had purchased plane tickets and booked hotels. She did not expect the Hong Kong government to do what Beijing would have done.

A columnist for the Hong Kong-based Economic Journal wrote: “Will the Hong Kong government require Broadway-show companies to perform Phantom of the Opera, Les Miserables, and Cats in HK after they have hired local people as their lighting specialists?”

In the past few years, the Hong Kong Immigration Department has had its share of scandals like this, from blacklisting Chinese dissidents, to massive deportations of people who protested against Chinese leaders, to the repatriation of a Tiananmen Massacre survivor who was immediately jailed on his arrival in China.

Hon. Albert Ho Chun-yan, chairman of the Democratic Party (Hong Kong) and legislative council member, has been in touch with the Immigration Department over multiple deportation and entry case issues.

Ho said that China’s liaison offices in Hong Kong frequently interfere with the department’s work. “There’s a huge loophole in the Immigration Department,” Ho said. “The central government (of China) can interfere at will and control the immigration policy of Hong Kong.” Ho also criticized the department for no longer following the law when making decisions.

Handed over to the Chinese communist regime in 1997, the Immigration Department of Hong Kong is a subsidiary of the Hong Kong Security Bureau. The head of the department, an important position, is nominated by the chief executive of the Hong Kong government and approved by China’s central government.

The Sino-British Joint Declaration signed in 1984 stipulates that Hong Kong “will be vested with executive, legislative, and independent judicial power, including that of final adjudication.” Therefore, today’s Hong Kong should allow law-abiding people with legal documents to enter and exit freely, as it had been doing before the hand-over. But since 1997, things have changed.

Around the “sensitive” days, including June 4th (anniversary of the Tiananmen Massacre), the Olympic Games, and visits by mainland leaders, the Immigration Department has faithfully barred activists for democracy, Falun Gong practitioners, and many others on China’s blacklist.

Wang Jinzhong is the vice president of the China Alliance for Democracy. On Dec. 23, 1996, he flew from Japan to Hong Kong to celebrate its last Christmas under British rule. He was “locked up for five hours and given no reason.” Before 1996, Wang had entered Hong Kong four times without resistance.