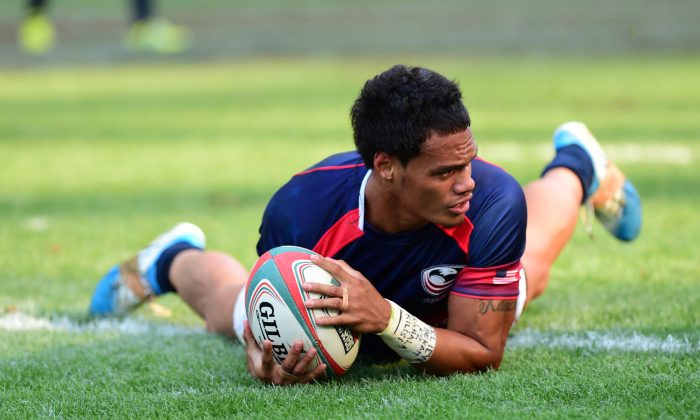 Maka Unufe of the United States touches down in the first minute of the second half to push them into a 21-14 lead against England 21-14 in their Pool D match. England hit back to tie the match 21-21 but this was sufficient for United States to finished top of the Group. (Bill Cox/Epoch Times)
HK Rugby Union

HONG KONG—It’s 0830 in the morning and the South Stand is full!! It’s colourful, buzzing and with a carnival atmosphere. There are dogs, frogs, droogs and dwarves and pilots, pirates and pharaohs. There is no other Sevens tournament like it….anywhere.

The day opened with the final round of the Qualifying tournament. This round of matches determined the final eight teams: quite how it was calculated is more arcane than Duckworth-Lewis in cricket! There were two standout matches: Hong Kong beat Uruguay 19-7 to go top of their Group (both teams qualified); and Spain, with discipline and defence, narrowly overcame the speed of Zimbabwe, 10-0 (again, both teams went through). Korea edged Tunisia 21-7 to claim a place in the quarters; Papua New Guinea won against Russia 26-17, (both teams went through); Brazil comprehensively beat Mexico 33-10 to get through; and Tonga and Guyana entertained the crowd with a high scoring match, won by Tonga 36-24. For both teams only honour was at stake, not a place in the quarters.

The quarter final line-up was Papua New Guinea against Uruguay; Hong Kong versus Russia; Zimbabwe and Brazil; and finally Spain against Korea. In the first match Papua New Guinea comfortably defeated Uruguay 38-10; Russia eased past Hong Kong 24-0. It was a disappointing conclusion to the tournament for Hong Kong, who had high hopes of competing with the best in the Qualifying competition, only to come up well short.

Zimbabwe, who impressed in their Group, beat Brazil, 21-14. Both teams played well, and Brazil as hosts for Rio, look to be improving as a seven. In the final match, Spain outclassed South Korea 47-7. Tomorrows semi-finals in the Qualifying competition are Papua New Guinea versus Russia; and Spain against Zimbabwe, a repeat of their Group match.

In the Main competition there were two rounds of matches that sorted the teams into their respective draw for Sunday’s competitive knockout. The games went to form, with two exceptions. Portugal came back strongly to tie with New Zealand 24-24, in a match that could have been an upset. And England and the USA drew a thrilling match 21-21. It meant the USA came top of the Group, and England now has to face Fiji tomorrow. The USA is looking like the real deal at Sevens. They have exceptionally quick players, and the muscle and height to defend and contest the ball. Combined with good technique, skill plus Madison Hughes as playmaker, they could well be a surprise package at Hong Kong. Mike Friday, the coach has done an exceptional job developing the USA Seven. In the trans-Tasman clash between Australia and New Zealand, New Zealand won 14-5, denying Australia possession throughout the match: the one time Australia had the ball they scored!

The quarter finals tomorrow (Sunday March 29) in the Main competition are Fiji versus England, South Africa against Australia; the USA versus Samoa, and New Zealand against Argentina. In the Bowl/Shield matches, it is Canada versus Kenya; France against Portugal; Wales versus Belgium; and Scotland against Japan.

The form teams are Fiji and South Africa, but both face tough matches tomorrow against England and Australia respectively. In previous years, some of the Group games, and the quarters would have been worthy of the final. But one thing has changed in the 40 years of the Hong Kong Sevens is the improvement in fitness and skill of all competing teams that make many of the games finals in their own right.

As the fans file out of the Stadium into the Hong Kong night, the bars and hostelries can look forward to a bumper evening. As sure as day follows night, they’ll be back tomorrow in their garb, ready to celebrate a Happy Fortieth for the Hong Kong Sevens.