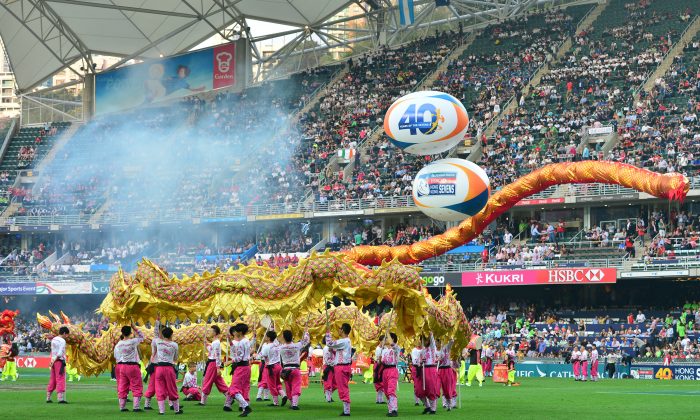 The Cathay Pacific/HSBC Hong Kong Sevens 2015 kicked off today March 27. This year’s tournament celebrates 40 years of Sevens, with a lot of reminders around the ground that celebrate past HK events. But it’s the action on the pitch that matters most. Unless you’re in the famous South Stand, and dressed to impress! This event can be as much about costume drama, as it is about the rugby. Even the corporate boxes get into the spirit with themed entrances and dress codes.

There are three events at the Hong Kong Sevens: the Women’s competition, the Qualifying competition where the winner will join the Sevens circuit next season; and the Main competition, where qualifying for the Rio Olympics is the ultimate prize this season.

The Women’s final was between Canada and Japan. Canada beat Holland in their semifinal, and Japan narrowly beat Hong Kong in theirs. The final was won comfortably by Canada 24-12. They dominated the first half, and by half time led 24-7. Japan came back in the second half; despite winning possession and territory, they could only score once. Holland were crowned worthy winners.

There were two rounds of the Qualifying competition played today. The 12 teams are divided into three Groups of four, but are ranked by matches won, points and tries scored. The two leading teams are Zimbabwe and Spain, both in the same group and both undefeated! Home town favourites, Hong Kong faltered against an impressive Brazilian team, losing 12-17. Hong Kong led well into the second half, but Brazil scored two late tries to win a close match. Hong Kong redeemed themselves against Mexico, scoring an impressive victory 38-5. The high score helped them attain 6th place in the rankings and second place in their group. Tomorrow, they face a tough match against Uruguay.

In the Main competition, all the teams played one match this evening. England muscled their way past Wales, 26-19, in a close fought match, where both sides showed impressive skill in attack and defence. France then beat Japan 24-7, roared on by a strong contingent of local supporters. Australia eased past a spirited Portuguese side, 33-5. Canada comfortably beat newcomers to the Hong Kong tournament, Belgium, 28-12. The USA stormed by Kenya in the second half. They were 0-14 down at half time, but scored three quick-fire tries at the start of the second period, with Carlin Isles leaving the crowd in awe of his raw speed. The USA hung on to win 21-14, in what was the day’s most entertaining match. South Africa dominated Argentina 24-0 and looked quietly impressive. New Zealand breezed by a spirited Scotland side 26-7. And in the final match, the crowd was entertained by a Fijian side that displayed wonderful passing skill to outscore Samoa 38-12.

Tomorrow, the competition continues. The Qualifying tournament will determine the ‘top eight’ and the Main competition will be closer to deciding which teams compete for the Cup, Plate, Shield or Bowl. And the crowd will be back, all 40,000, many in fancy dress, and enjoying what is probably Rugby’s most festive festival.