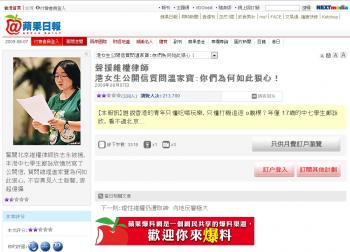 A 17-year-old high school student has taken on the leadership of the Chinese Communist Party in an appeal against the arrest of human rights lawyer Xu Zhiyong, who was detained in Beijing by Chinese authorities.

Cheng Wing Yan traveled from Hong Kong to Beijing with 30 classmates in April to learn more about China. At the time, she had a long discussion on Chinese politics and law with Mr. Xu at his office.

Last week Mr. Xu was arrested by Chinese authorities and Yan sprang to action in his defence.

She wrote a letter to Premier Wen Jiabao questioning his legitimacy as a role model. The letter, titled, “Please Convince Me from a Legal Standpoint,” was published in Hong Kong’s Apple Daily on August 7.

Yan's letter posed a series of questions to the Chinese Premier about the legality of Xu Zhiyong’s arrest.

In her open letter she wrote: “Premier Wen, at the mention of your name, everybody thinks you are the citizens’ Premier, taking the people as the basis for doing things, and standing on the side of the people’s interests. Some children, captivated by your people-oriented image, call you grandpa Wen, taking you as an ideal to imitate.”

“But, when thinking of arrested dissidents and banned media outlets under your leadership, I have to doubt your qualifications as a model for these innocent children! Does China’s education system teach our young people to remove their opponents when they have disagreements, and not about the doctrines of humanity and morality preserved for thousands of years in China?”

Xu Zhiyong was a founding member of the Open Constitution Initiative, known as Gongmeng in Chinese, a non-profit legal centre which represented parents of child-victims of poisoned milk, petitioners, and others seeking legal protections in the country.

When Yan's friends heard of the arrest, they became indignant, and opened a Facebook group to support Mr. Xu.

“I only have a cursory knowledge of Chinese Law, but I know that the Constitution is the country’s most comprehensive basic law and has the highest binding power. Article 35 of our country’s Constitution states that citizens of People’s Republic of China have the freedom of speech and the freedom to form associations. Article 37 states clearly that citizens of People’s Republic of China enjoy personal freedom and it prohibits illegal arrest or other means of illegally seizing or limiting citizens’ personal freedom. Based on my own interpretation of these Articles, I think Mr. Xu should be free to stay in his home or work at his office,” she wrote.

“Premier Wen, I really don’t understand why you are so cruel. Why do you have to use such means to deal with a scholar who understands politics and who is capable of rational discourse?”