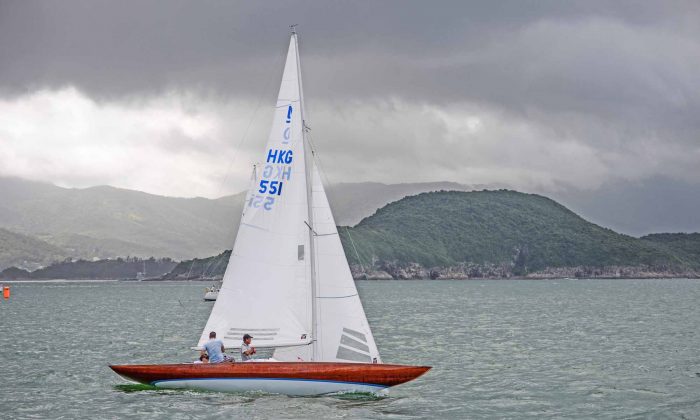 ‘Puff’ winner of both races in the Hebe Haven Summer Saturday series on June 22. ‘Puff’ has a perfect record in the four races so far and leads ‘Moonraker II’ in the overall standings by six points. (Bill Cox/Epoch Times)
International

After four races the winners are gradually showing their heads in the Hebe Haven Yacht Club Summer Saturday Series, but it is still early days in this 12-race event, particularly as up to four discards may be possible depending on the number of races completed.

Another T3 storm warning over night on Friday June 21 put off a few boats from taking part in Race Day-2, but 28 boats still turned out.

The weather was a bit dull and lifeless for the first race of the day (3 knots of wind) and as a consequence, the Race Officer Peter McCaffery shortened the race by one lap for the slower boats.

However, almost immediately after making that decision the wind picked up to 11 knots and Race-4, the second race of the day, was far more enjoyable for competitors and spectators.

“Signal 8″ was later than expected, returning from a morning Race around Kau Sai Chau Island and just missed the start of Race-3, but she made up for it in Race-4 by taking line honours and first place on corrected time in the IRC class.

Although “Lighthorse” took line honours in the first race (Race-3), Impala’s mopped up on corrected time with “Impala 1″, “Taxi” and “Moll” taking the first three places.

However, the bigger boats were much more competitive in the second race: “Signal 8″ took line honours and first place on corrected time; “Stella” posted a second place ahead of the Impala trio; meanwhile, “Lighthorse” also pushed up into fourth place.

In the HKPN class, “Bits & Pieces” again won line honours in each of the two races, but still finished down the order in 7th and 5th places, respectively. Geoff Tayler in “Paloma”, who has had a lean time recently, won Race-3 on corrected time. Ben Chong took second place in “JeNa PaBe” and Justin Shave came in third with “Jazz”.

Steve Bourne in “Merlin” was another late-comer for Race-3 and was told he was too late to start, but that did not stop Bourne from running the course. Back in the Club House after the races he was pleased to recount to the Epoch Times that he made up 18 minutes over some of the boats and managed to catch and overtake some competitors. Although he was not officially in the race, he still found it a good challenge!

The first race (Race-3) was won by “Phoenix”, 70 seconds ahead of “Stingray” in second, with “Black Magic” third.

Jim Daly, in his GP26 “Stingray”, indicated that he was much happier racing with the Sports Boats category rather than IRC and finds the competition more exciting.

Another newcomer to the category is Magic 25 “DaziBao”.

Like “Signal 8″, Bourne having missed the first race, seemed to make an extra effort in Race-4. He took off from the start as if he meant business and continued the race sailing beautifully, crossing the line more than four minutes ahead of his nearest rival “Phoenix”, with “Stingray” well in contention in third place just 20 seconds behind.

However, with “Fly By Wire” not racing this weekend, Bourne, by missing out on the first race, lost an opportunity to further extend his lead in the series standings.

After four races in the series, Impala’s hold the first three places in IRC with “Impala 1″ in first place, “Taxi” in second and “Moll” in third position. But if “Signal 8″ and “Stella” can see out the rest of the series, they could be up among the prizes after taking the allowed discards, assuming more than eight races are run. The discards in this series is two for eight or nine races and four for 10 to 12 races.

In HKPN, “Kyte” is putting in some good performances and leading the standings after four races, with “JeNa PaBe” in second place and “Bits & Pieces” in third. But Justin Shave in “Jazz” has some consistent results; currently in fourth place, he has a good chance to improve further.

“Merlin” is currently leading the series standings in the Sports Boat category, with “Phoenix” second and “Stingray” third. But another star performer “Fly By Wire”, who missed out this week by not competing, will no doubt have something to say about this as the series progresses.

In the Dragon Class, “Puff” still has a clean sheet and already has an impressive lead over “Moonraker II”, “Maiden of Hong Kong” and “Eaux Vives”.