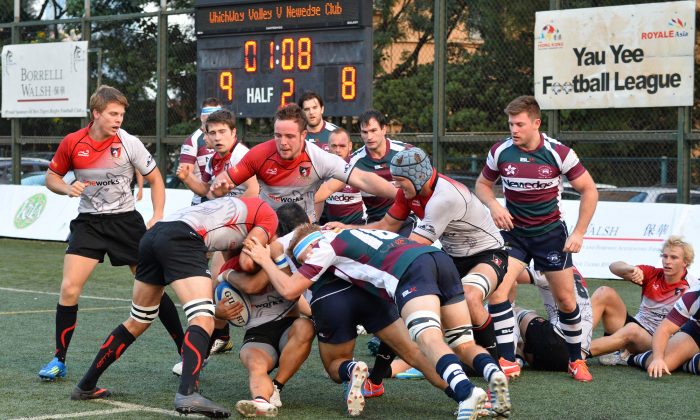 WhichWay Valley apply the pressure on Newedge Club at the start of the second half in their 38-8 match-winning performance in the Hong Kong Rugby Football Union Premiership match at King’s Park on the opening day of the 2013-14 season on Saturday Oct 5, 2013. (Bill Cox/Epoch Times)
International

Starting the afternoon, Leighton Asia Hong Kong Cricket Club had a convincing win over Hong Kong Scottish 34-18. Two early tries by Jonathan Patterson got the points rolling for Cricket Club, but Scottish came back with tries by Lee Vaughan and Adrian Griffiths to cut the lead to 13-12. Cricket Club then pushed ahead again with a try from James Cooper and a conversion and penalty by Nick Wheatley making the score 21-12 to HKCC at the break. In the second half two more penalties and a conversion by Wheatley and a try by Pale Tauti saw HKCC through to a well deserved win.

In the second match, WhichWay Valley put on a stunning performance to beat last year’s runners-up Newedge Club in a run-away victory 38-8. Although Club started well scoring a try in the first minute through Tom McColl, it looked a real “first match of the season” for Club, who struggled to get their game together. When they did get into attacking positions their ball handling let them down. Valley on the other hand got better as the game progressed with winger Salom Yiu and fullback Reece Hamon each scoring twice.

Valley player Jean-Baptiste Aldige, who has been involved in the Hong Kong Qualifiers and was not available to play this week, gave his view of the game and Valley’s prospects for the season to the Epoch Times.

“It was a good performance for the first game for Valley, but Valley has a big squad with many talented players, although I am not on the pitch today. I think they are favourites for the Championship,” said Aldige.

He was surprised at the match’s final score margin.

“Football Club is a very serious club and they work hard also.

“I am sure the 38-8 score is not the true score – there should not be such a difference in points between these two clubs. But maybe more international players on the Valley side made the difference today,” Aldige said.

There was no surprise for defending champions Abacus Kowloon as they showed their continuing dominance against Borrelli Tigers. Their 35-3 win took them immediately to the top of the table on points difference. Borrelli Tigers put up fierce resistance in the first half, but a try from lock forward Dave Keast put Kowloon ahead 7-3 at half time. Tries by Duncan Pollock, skipper Matthew Stockdale and James Robinson along with a second try for Keast in the second half, gave Kowloon a well deserved victory.

All three winning clubs scored four or more tries to take a bonus point giving them 5-points in total. None of the losing teams were close enough on points to earn a point.