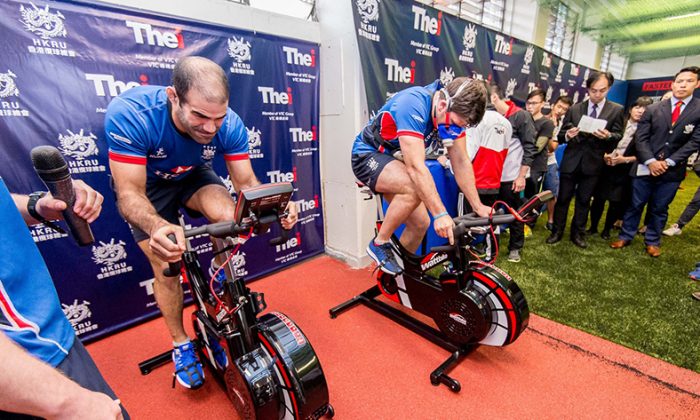 HONG KONG—On March 21, 2016, the Hong Kong Rugby Union (HKRU) and The Technological and Higher Education Institute of Hong Kong (THEi) officially opened the Elite Rugby Training Centre (ETRC) at the THEi campus in Kowloon Tong. The HKRU also took the opportunity to announce the Elite Player Programme (ERP), for the 15 a-side game to the support the existing arrangements for the Hong Kong Men and Women Sevens squads.

Both announcements are a major step forward to upgrade the professionalism of Hong Kong rugby and introduce the benefits of applied science to the training regime for players, supported by the THEi team and the Hong Kong Rugby Union coaching staff, led by Leigh Jones. There will be a squad of 30-40 players, men and women, who will be fulltime professional rugby players, representing Hong Kong at senior and age grade level, and yet still given sufficient time off to pursue study and or vocational work for 12 hours a week.

Jones has returned to Hong Kong having worked with Eddie Jones and the Japan rugby squad who lit-up world rugby with Japans spirited victory over South Africa at the 2015 Rugby World Cup. Jones (Eddie) has since moved on to guide England to their recent Grand Slam; and Jones (Leigh) has returned to guide Hong Kong to achieve ambitions that include Rugby World Cup qualification (2019, 2023) and have Hong Kong rival Japan for supremacy in Asia.

Professor David Lim, in opening the Centre, extolled the development of the THEi, and how this initiative, under the auspices of the Vocational Training Council, will propel sports science, therapy, coaching and performance to levels of excellence in Hong Kong using rugby as the platform. Pieter Schats, Chairman of HKRU, spoke of the value the ETRC and ERP will bring to Hong Kong rugby, and how rugby creates a halo to demonstrate community benefit, and the value of having a healthy respect for exercise and what it brings to people and communities.

The highlight of the morning was seeing the Centre put to use by some of the ‘Elite Players’, working their way through exercises involving sophisticated power bikes (the same used by Team GB in the Olympic preparation for London 2012, and the New Zealand All Blacks at the Rugby World Cup 2015) which measure performance from oxygen intake to power output per leg; plus weight training stations, speed tracks, reaction sensors and computers that measure your ability to jump.

Perhaps the most telling presence at the Centre that morning was not the computers, the weight training machinery, the presence of lab-coated students of sports science, but three words: Faster, Fitter, Lower. This will be the mantra for Hong Kong. It will provide focus for the ambition of the Elite Players and ETRC to drive excellence on field and a playing strategy that may one day create a Hong Kong XV, either men’s or women, who can take on the best. A lofty ambition, but there was enough evidence at ETRC/THEi that Hong Kong has the manpower, resources, and pillars to create a team that just may become fitter, faster and lower than any other; and compete at the highest level.  Bring it on.