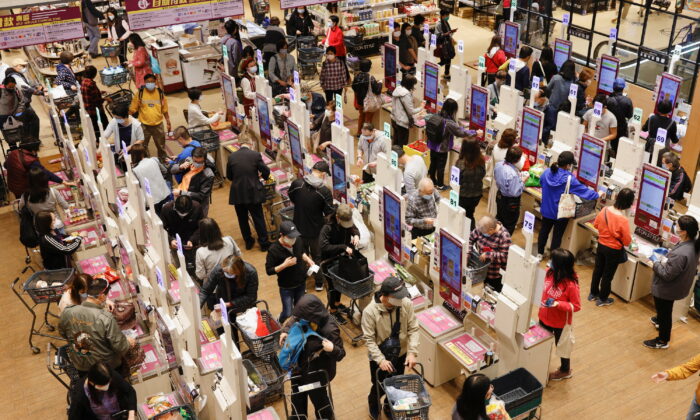 Customers wearing masks queue up to pay at a supermarket, ahead of mass coronavirus testing, in Hong Kong, on March 2, 2022. (Tyrone Siu/Reuters)
China

HONG KONG—Two of Hong Kong’s largest consumer retail chains started rationing some food and drug items on Friday to curb panic buying that has plagued the city over the past week amid fears of a citywide lockdown as COVID-19 cases soar.

On Wednesday, ParknShop announced shorter opening hours, with some of its 200 branches shutting at 3 p.m.—by which time many shops across the Asian financial hub have been stripped of fresh and frozen meat and vegetables in recent days.

Both ParknShop and Watsons are units of the Hong Kong listed conglomerate, CK Hutchison.

Amid public complaints of confused official messaging, Hong Kong Chief Executive Carrie Lam has said her government had no plan for a “complete lockdown” while it plots compulsory testing of the city’s 7.4 million residents.

The government would announce details of the plan when finalized, she said.

Authorities reported a new daily record of 56,827 new infections and 144 deaths on Thursday, an exponential rise from about 100 in early February.

The surge in cases and fears over a lockdown have sparked mass departures of people from the city, where authorities are clinging to a “dynamic zero” policy that seeks to eradicate all outbreaks.

Many restaurants and shops are shuttered, while its Central financial district is eerily quiet and few people are out in normally bustling neighborhoods.