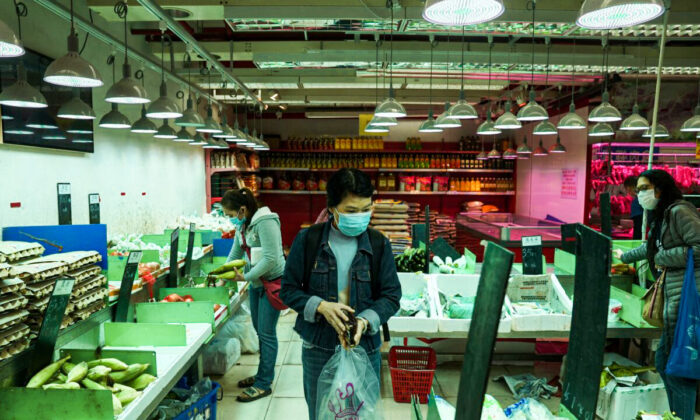 HONG KONG—Hong Kong residents crowded supermarkets and neighborhood fresh food markets on Monday to stock up on vegetables, noodles ,and other necessities after a record number of COVID-19 infections in the city and transport disruptions at the border with mainland China.

The city of 7.5 million people reported a record 614 coronavirus cases on Monday, in the biggest test yet for the Chinese territory’s zero-COVID strategy.

Hong Kong imports 90 percent of its food supplies, with the mainland its most important source, especially for fresh food. Consumers have already seen a shortage of some foreign imported goods, including premium seafood, due to stringent flight restrictions.

The government tried to assuage worries of a shortage of food from the mainland after some cross-border truck drivers tested positive for the coronavirus.

Several drivers have been forced to isolate but overall fresh food supplies “remained stable”, despite a drop in supply of vegetables to certain markets, it said on Sunday.

At a fresh food market in Tin Shui Wai, in the city’s northern New Territories, vendors said there would be no vegetables in coming days, prompting customers to buy up produce.

“Of course you have to buy. There will be no vegetables from tomorrow. The trucks can’t come here … so the vegetables are very, very pricey,” said a 50 year old woman surnamed Chow.

John Chan, a vegetable vendor, said the disruptions had seen supply drop by 30 percent, including for products such as Chinese flowering cabbage. He cautioned that hundreds of kilograms of vegetables due to arrive on Tuesday may not be able to arrive.

“I still don’t know if they can cross the border. If there is none, the prices will further increase or we have nothing to sell.”

Shelves stocking vegetables, tissues, and cup noodles were bare at several supermarkets across the former British colony with customers stocking up over concerns that products would be even harder to get in the coming days.

“The COVID situation is severe. And there are no veggies, so I stockpile a bit,” she said.