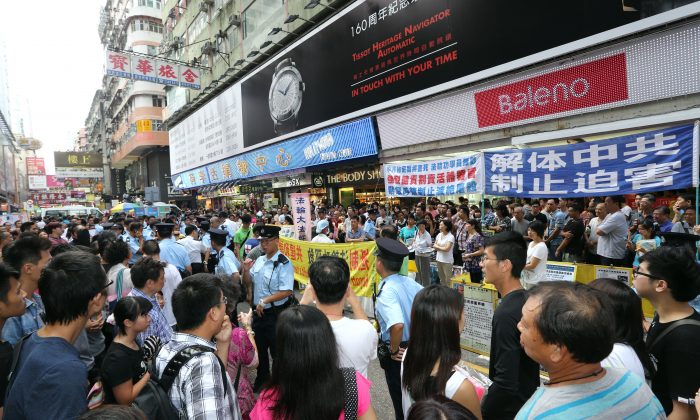 A crowd gathers in front of a Falun Gong information site in Mong Kok District. Members of the Hong Kong Youth Care Association were harassing the practitioners on July 14, prompting bystanders to confront the police for their failure to intervene. (Poon Zoi-syu/Epoch Times)
China

HONG KONG—In the latest altercation between a Chinese Communist Party front group in Hong Kong and practitioners of Falun Gong, a spiritual group, local residents confronted the police for their refusal to step in to resolve the conflict.

Since last June, the Hong Kong Youth Care Association (HKYCA) began harassing practitioners of Falun Gong, a spiritual discipline persecuted in China since 1999, by continuously disrupting their information sites, which display posters and banners about the ongoing suppression of Falun Gong.

The HKYCA has well-documented ties to the Chinese Communist Party, including sharing the same office and staff as a local 610 office—an extralegal Party agency established to carry out the persecution of Falun Gong—in Shenzhen, a city located just across the border in mainland China.

At around 4:30pm on July 14, several members of the HKYCA unfurled banners in front of a Falun Gong information site located on Sai Yeung Choi Street South, a busy street in the Mong Kok District. HKYCA’s banners blocked the site from view, which detailed forced organ harvesting from imprisoned practitioners in China.

Police then arrived and attempted to persuade the group to stop disrupting the information site. When the group refused to leave, the police then blocked off the site with police tape, preventing the public from entering, and stopping reporters from taking photos or conducting interviews.

At one point, police also stood in formation to blockade the site from the crowd that was gathering.

One middle-aged man rushed into the blocked-off area to confront the police, asking, “Why aren’t you letting me go inside? You let them [HKYCA] go inside to harass people, why can’t I come in?” He accused the police of siding with Chinese Communist Party (CCP), “Are you willing to become Chinese public security officers?”

The ongoing confrontation was caught on video by an Epoch Times reporter, with the crowd cheering when some bystanders began cursing at members of the HKYCA. At one point, the crowd erupted in chants to tell the group to leave.

Other onlookers expressed their discontent with the HKYCA’s actions and the police’s lack of intervention to stop the HKYCA. One bystander said, “This is supposed to be ‘one country, two systems.’ If people in my family practiced Falun Gong, would they come to surround my home?”

Another middle-aged man said, “They [Falun Gong practitioners] are peacefully petitioning, and they are not being violent. You should go somewhere else to put up your banners!” He and another bystander concluded, “The CCP must’ve told [chief executive] Leung Chun-ying to do this [have the police blockade the site]. Then, Leung told the Department of Justice, and then the Department of Justice instructed the police. Otherwise, the HKYCA would have dispersed long ago.”

In the video, a young woman is also shown shouting loudly at the HKYCA, saying that this was not the first time the group harassed Falun Gong practitioners. “You are bringing shame to the citizens of Hong Kong. And you call yourselves ‘caring’? Aren’t you ashamed? The police are even on your side. People have the right to free expression, you know. If the CCP were doing things right, then they wouldn’t have to resort to such immoral deeds.”

A few hours later, the police presence diminished, but a crowd was still gathered around the site. One bystander confronted a high-level female police officer who arrived at the scene, asking her why the police are not doing anything to stop the HKYCA, when they are provoking Falun Gong and inciting the public to a clamor. She replied that it was because both sides have not reached a compromise. When the bystander told her there was nothing to compromise on, since the confrontation could be avoided if the HKYCA set up their stand elsewhere, a male officer pulled the woman away, saying that they would discuss it later.

Two other city residents were seen carrying loudspeakers, shouting condemnations of the Youth Care group. One said that Falun Gong had set up their booth here for years without any problems, but now are being harassed by the HKYCA. “We will not let Leung Chun-ying get away with this. We will not let off the Special Administrative Region government. They are making trouble every day, bringing harm to Hong Kong, to the people. They are betraying Hong Kong, betraying the country!”

At around 8 p.m., the police left. Around that time, a scuffle broke out between members of HKYCA and bystanders. In the video, a man in a blue T-shirt, identified as vice president of the group, Lin Guo-an, is seen chasing after several bystanders angrily, pinching a female Falun Gong practitioner’s hand to grab a piece of paper from her, and repeatedly elbowing a male Falun Gong practitioner. A woman dressed in yellow, identified as Xiao Xiaorong and a leader of the group, is also seen kicking a bystander violently. Several people intervened to break up the scuffle.

When police arrived, bystanders said HKYCA members had provoked the attack. Police took two bystanders away to the police bureau for further investigation.

Written in English by Annie Wu.