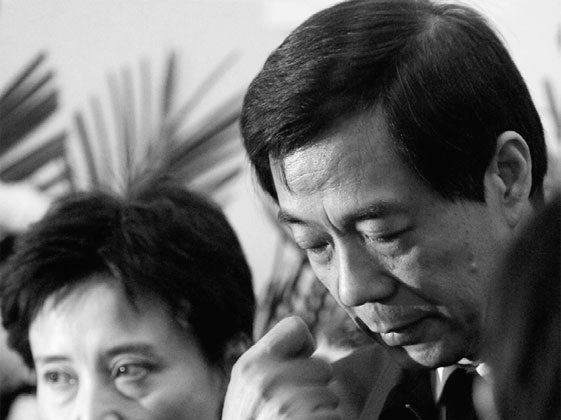 The day after the high-profile trial of Gu Kailai, the wife of disgraced Party official Bo Xilai, a Hong Kong reporter was beaten by plainclothes police while attempting to report on arrests outside the court. Uniformed police looked the other way.

The assault of Asia Television reporter Lei Zhaohe happened at the Intermediate People’s Court in Hefei, Anhui province around 9:30 a.m. on Aug. 10, according to Mingpao, a Hong Kong-based newspaper.

“Two men ran at me, but [I] did not fall and continued filming. Then a man wearing a striped shirt came from behind and put his hands around me. I couldn’t see as he started to hit and scratch my stomach,” Lei said, according to a report on Asia Television, or ATV.

ATV is one of two main free-to-air broadcasters in Hong Kong. It operates six channels in the country, including ATV Home, in Cantonese, and CCTV-1, the international channel of China Central Television.

Lei began to film after witnessing a few people being dragged by the police. One of them was a woman, who was being treated roughly and had been pushed to the ground, the Mingpao article said.

According to the New York-based NTD Television, the individuals were residents of Hefei City who had gone to protest what they called previous unjust treatment by the Chinese court system.

A number of other reporters who were on the scene rushed over when they saw Lei being restrained, but the police used umbrellas to attempt to block him from view. Lei was trying to struggle free, while the police were trying to confiscate his equipment.

He suffered a swollen waist, scratches on his torso, and a bloody thumb, according to Mingpao.

The Hong Kong Reporters Association condemned the incident, stating that the Hefei Public Security office openly trampled on press freedom. In a statement, the association requested Hong Kong Chief Executive Leung Chun-ying to address the issue and to ensure Hong Kong reporters’ safety and freedom of press within China.