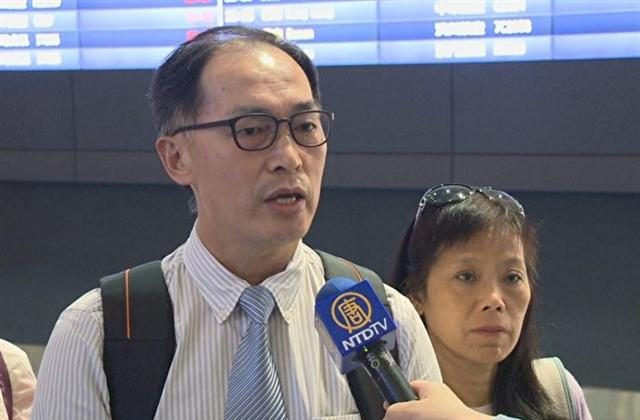 43 Taiwan Falun Gong practitioners were stopped at the Hong Kong airport and sent back to Taiwan on July 22 and July 23 even though they presented valid travel documents and had committed no crimes. (NTD Television)
China

But this year, at least 43 Taiwanese Falun Gong practitioners were stopped after landing at the airport on July 22 and 23 and repatriated back to Taiwan. Security officers and police detained them for hours in the immigrations office, combed through their luggage, and interrogated them individually.

The practitioners had committed no crimes and presented valid travel documents. They were given no official explanation as to why they were being turned away.

“We kept asking what the issue was, but they just claimed that they needed to inspect us, and then they had us sit” in the immigrations office, said a Taiwanese Falun Gong practitioner surnamed Xu in an interview with New Tang Dynasty Television (NTD), a sister media of The Epoch Times.

Another Falun Gong practitioner, surnamed Zheng, told Radio Free Asia, “They took our identification documents and photocopied all of them before placing our IDs into individual case files.”

He and other Falun Gong practitioners were forced to board returning flights to Taiwan, and their confiscated documents were not returned until they had landed, Zheng said.

The traditional Chinese spiritual discipline of Falun Gong, also known as Falun Dafa, has been persecuted by the Chinese communist regime since July 20, 1999. In the 1990s, the practice had attracted upwards of 70 million adherents for its moral philosophy and uplifting health benefits. Its popularity drew the ire of then-Party chief Jiang Zemin who decided to wipe out the practice.

Every year, Falun Gong practitioners around the world commemorate the launch of the persecution with rallies, candlelight vigils, and parades, including in semi-autonomous Hong Kong, where Falun Gong practitioners enjoy considerable freedom compared to their counterparts in mainland China who are imprisoned, brainwashed, and tortured to renounce their beliefs.

“I think Taiwan’s current administration, the Taiwanese Strait Exchange Foundation, and the Association for Relations Across the Taiwan Straits all need to publicly condemn” what happened in Hong Kong, Hung added.

“We, the Falun Gong Human Rights Lawyers Group, solemnly protest against the Hong Kong government for once again unlawfully repatriating Falun Gong practitioners even though they all had valid travel documents,” said the spokesperson of the organization, Theresa Chu, in an interview with NTD.

“Here, we call on the new Chief Executive Carrie Lam and the Director of Immigration Erick Tsang not to participate in the persecution of Falun Gong and not to damage the policy of one country, two systems,” Chu added.