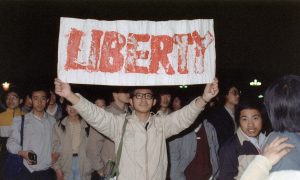 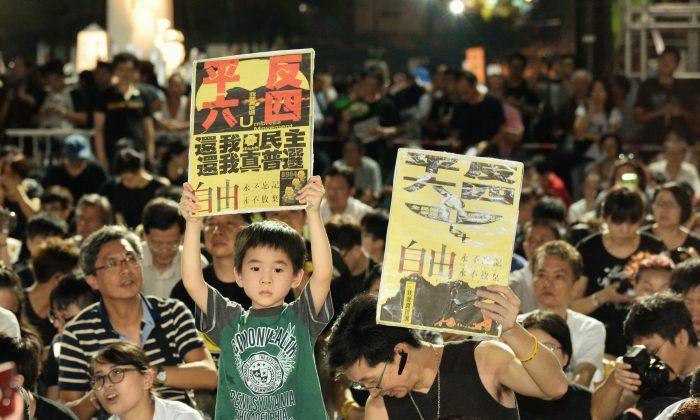 HONG KONG—On the evening of June 4, the 26th anniversary of the Tiananmen Square Massacre, 135,000 people gathered for a candlelight vigil in Hong Kong to memorialize the event.

The Hong Kong Alliance in Support of Patriotic Democratic Movements of China held the annual vigil at Victoria Park. Lights were switched off, candles were lit and held up, and a Tiananmen Square massacre video was played on the podium.

Several young students laid out wreaths of flowers for a monument to the martyrs for democracy, and each victim’s name was read aloud. Secondary and primary school students lit a torch together at the podium, symbolizing passing on the memories and hope.

Mak Hoi-wah, vice-chairman of the Alliance, read obituaries, followed by a minute of silence with all the participants.

For the first time, the Hong Kong Federation of Students was absent from the memorial. However, representatives from four universities and institutions gave speeches and then burned a copy of the Hong Kong Basic Law onstage to protest the damage done to the principle of “one country, two systems” that sets Hong Kong apart from mainland China.

Alliance chairman Albert Ho Chun-yan read the declaration of the assembly condemning the inhuman massacre that took place 26 years ago.

“The small lights of the candles reawaken our conscience and recall our enthusiasm,” he said. “In the face of this adverse situation, we have to say goodbye to cynicism and refuse to accept changes that are forced on us. Say no to totalitarianism.”

Ho said that the dictatorial nature of the Communist Party has been fully exposed during its dealing with the Hong Kong electoral reform.

“Under the cover of national security, the National People’s Congress’s 8/31 resolution is to deny genuine universal suffrage in Hong Kong,” he said.

He was referring to the decision made by the National People’s Congress (NPC) last Aug. 31 that Hong Kong people would have the freedom to vote in the 2017 Chief Executive election, but only if the candidates were chosen by a pro-Beijing committee. Hongkongers did not consider this to be real universal suffrage.

“We will stand in the front line for democratic rights and continue to strive for true universal suffrage and support China’s democracy movement,” Ho said.

Ho thought 135,000 attendees was a considerable number. He was moved by the Hong Kong people’s determination to ask to redress the June 4, 1989 crackdown—to ask that the CCP, at a minimum, no longer treat the students who were part of the democracy movement as criminals.

At the end of the candlelight vigil, the Standing Committee of the Alliance burned a condolence book while everyone held candles. The memorial ended with singing and mottos.

Last Oct. 1, Beijing poet Wang Zang published a photo of himself holding an umbrella on social media to support the Umbrella Movement. He was then arrested by Beijing police.

Wang Zang’s wife, Wang Yixing, expressed her gratitude to the Hong Kong people. Wang Zang has been in detention since then and has gone through brutal torture. Wang Yixing and her child have been subjected to persecution as well.

“During that period of time, we had no fixed place to live, and we were often hungry,” she said. “My daughter often talks about her dad. She misses him and hopes she can see her dad when she is three.”

Zhui’s wife said she hoped her husband would not give up in prison. She said her daughter was deeply hurt by the arrest and often woke up with nightmares.

Seven recent high school graduates gathered in Victoria Park. Some of them were attending the candlelight vigil for the first time, and one of them, Miss Cheung, had participated in the Umbrella Movement.

She believes the June 4 memorial in Hong Kong will have an influence on mainland China. “Anyway, it will put pressure on the Chinese government,” she said.

Mr. Lau, who works in the transportation sector, said he has attended almost every year and will continue.

“Even if the CCP does not change, we have to be honest with our conscience. So many people died. Why is there no vindication for them? Why is no compensation provided?” Lau said.

Lau said it was the same for the persecuted spiritual practice Falun Gong. He believes we must come forward to stop the persecution.

“If we did not speak out, and if the CCP treated us the same way in the future, who would speak out for us?” he said.

He believes the June 4 memorial is a conscience movement. “Hong Kong people are very sad about the June 4 crackdown. Now someone has tried to justify the suppression. These people are burying their conscience.”

He added that the CCP should not continue to exist. “Why should a government exist if it massacred the people in such cruel way? It’s no different than being evil.”

Mainland Human Rights Observation member Qin Dongming planned to come to Hong Kong to protest with a letter written in blood, but his friends could not make the trip. He is grateful to the Hong Kong people’s contribution, and he accused the CCP of covering up the truth about June 4.

“It’s because once the truth is made public, the mainland CCP regime will lose its legitimacy,” Qin said.

Qin formally declared his withdrawal from the CCP and its affiliated organizations, using his real name rather than a pseudonym. He said he was “willing to quit all CCP organizations.”