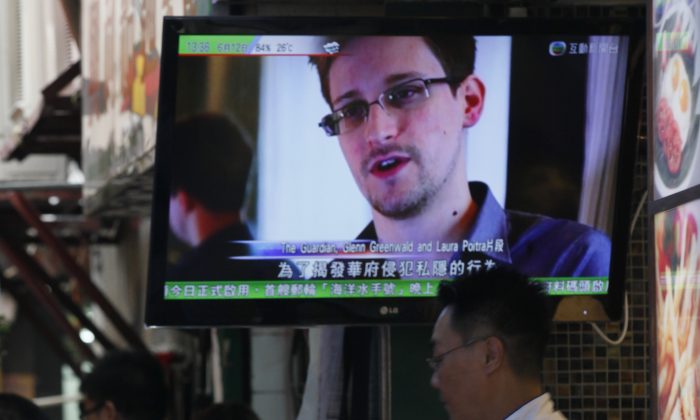 A TV screen shows the news of Edward Snowden, former CIA employee who leaked top-secret documents about sweeping U.S. surveillance programs, at a restaurant in Hong Kong on Wednesday, June 12, 2013. Snowden's disclosure of the NSA documents has been a propaganda windfall for the Chinese regime. (AP Photo/Kin Cheung)
Opinion

Hong Kong Provides Snowden A Stage, But No Safety

NSA leaker Edward Snowden has gone to ground in Hong Kong, retreating into a safe house somewhere in the Special Administrative Region. While he has denied having any connection with China, saying he only deals with journalists, the suspicion Snowden is working with Chinese agents will not go away.

Although Hong Kong is an English-speaking city, its culture is mainly Chinese. On the street, most people speak Cantonese. It is fun to visit Hong Kong as a tourist. However, a westerner who needs to hide in Hong Kong would be totally blind there.

A westerner in Hong Kong stands out too much and could not move around without people noticing him. Only with the help of locals could he hide.

Although Hong Kong inherited a certain degree of freedom from British rule, Beijing has gained more and more control over its finances, business, media, and government. Hong Kong only retains a bit more space or freedom because Beijing still needs Hong Kong to give China a different window to the world. It is in Beijing’s own interests not to turn Hong Kong into another mainland city.

Before Hong Kong was returned to China, many local people prepared passports for Canada and other countries and were ready to flee. A large number of Hong Kong citizens only stayed there to make money before Beijing finally took over.

Snowden’s choice of Hong Kong as a place to release his documents most probably reflects Chinese influence. Either he knowingly worked with a Chinese agent, or was unknowingly manipulated by a Chinese agent.

Fantasies of getting worldwide attention come easily to reserved, quiet characters like Snowden. When a Chinese agent helped Snowden on his path toward Hong Kong and disclosure, this only excited his ambition.

Snowden is like an extremely smart but naive teenager. Unfortunately, he got access to bombs. He has really enjoyed dropping them one by one, with good timing, and enjoyed so many people responding to him.

Last weekend, Hong Kong had a group protest of a few hundred people asking the government to protect Snowden. This is another sign of how the Chinese authorities are behind Snowden’s appearance in Hong Kong.

The protest is right out of the Chinese regime’s playbook. When Beijing needs something done outside the mainland, it gets some local people to make the regime’s demands in a protest.

Snowden might think he has made the best arrangements for his safety, since Beijing benefited most from his actions. Yes, Beijing would love to keep him in Hong Kong and let him slowly release classified documents.

Would Beijing help him if Snowden were in real trouble? Let’s look at the fate of former Chinese Communist Party espionage agent Larry Wu-tai Chin. Larry Chin sold classified documents to the CCP from 1952 to 1985. He worked for the CIA and his information had greatly helped the CCP in the Korean and Vietnam Wars, and in the diplomatic negotiations with the United States during Nixon’s presidency.

In 1980 Chin was awarded a medal from the CIA for his long and distinguished service. In 1985, charges were prepared against him for spying on behalf of China. After he was arrested, he appealed to the CCP to do an exchange of spies to save him. The CCP denied any connection with him. In despair, Chin used a garbage bag to commit suicide in his cell.

There was a Taiwan air force pilot who defected to the mainland in the 1980s. Beijing welcomed him, made big news out of the defection, and gave him a position. After that, he never had enough gas in his plane to leave China.

The CCP never trusted him. The Chinese people would never trust anyone that defects or betrays his own country no matter what reason he gives. The CCP even discriminated against war veterans who had been captured by the enemy.

Was Iceland a possibility for Snowden? Iceland is a small country. It relies on resources from outside and has always handled relationships with any big country very carefully.

Does Iceland truly respect privacy? When CCP leader Jiang Zemin visited Iceland, the CCP asked Iceland to keep protestors out of the country and gave Iceland a blacklist. Iceland used the blacklist and denied the boarding of protestors at airports in many countries. Iceland abandoned its principles in this case, when its own interests were at stake. When it comes to Snowden, it is hard to know what Iceland would decide.

In opening remarks at a town hall meeting, Congressman Frank Wolf said, America is strong because we are blessed.

It is remarkable that we did not change the nature of our open society after 9/11. That we do not change is a reflection of our confidence that we are in fact blessed.

We now see a serious debate on how we should balance freedom, privacy, and national security. One thing we have to understand is that this is not peace time. We have enjoyed peace and freedom for so long in this land that we have forgotten that peace and freedom were won by war.

Terrorists and the Chinese regime are at war with us. If we can accept tighter security at airports, why can’t we accept other security measures the government needs to take in other ways?

There have been people who disagreed with the U.S. government and disclosed classified documents before—Bradley Manning and Daniel Ellsberg are the two most famous cases.

Snowden’s case differs from theirs in one important way: it has been especially beneficial to the CCP. Just as the world was uniting to condemn the Chinese regime’s hacking, suddenly Snowden has made the United States the target. The propaganda workers in Beijing could not have planned this better.

We as Americans can learn from this and have a better understanding of what global environment we are in now.