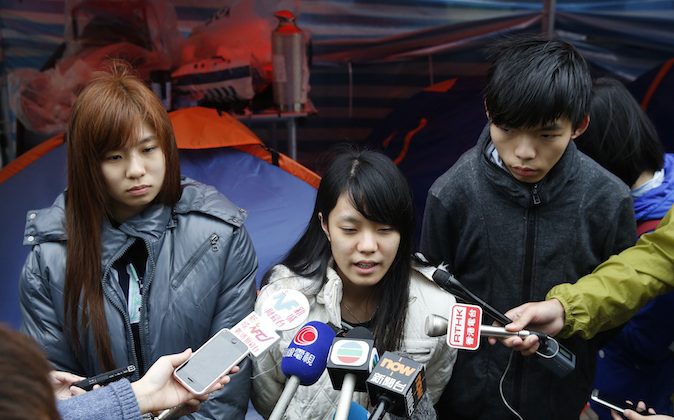 Three students, from right, Joshua Wong, Prince Wong and Isabella Lo speak to the media during their hunger strike at the occupied area outside government headquarters in Hong Kong on Tuesday, Dec. 2, 2014. (AP Photo/Kin Cheung)
China

Edited on Dec. 8 with changes to the upcoming Admiralty clearing.

Student group Scholarism trio Joshua Wong, Isabella Lo and Prince Wong started their hunger strike on Monday, Dec. 1, in a bid to force the Hong Kong government back to negotiation table and restart talks on democratic reform in the semiautonomous city.

Towards the end of their hunger strike, which was held at Tim Mei Avenue near government offices, all three students were wheelchair-bound.

“Even if I stop the hunger strike, it doesn’t mean the government can ignore our demands,” Wong, the 18-year-old leader of Scholarism, said on his Facebook page.

Wong only drank plain water and one teaspoon of glucose water during his 108 hour long hunger strike.

Later, Scholarism announced that another member, 17-year-old Prince Wong, ended her hunger strike after 118 hours on the advice of doctors and was taken to a hospital. Wong’s weight had dropped to 81 pounds (36.8 kilograms). She and Joshua Wong are not related.

A third member, Isabella Lo, 18, pulled out earlier in the week after 95 hours.

Two other Scholarism members, Gloria Cheng and Eddie Ng, both 20, joined the strike mid-week and are still refusing food.

On Friday, pro-establishment lawmakers James Tien and Felix Chung and an independent lawmaker, Paul Tse, visited the hunger strikers. Tien, who was earlier expelled from a Chinese regime consultation body, offered to pass on the students’ request of wanting a public dialogue with the government to Chief Executive Leung Chun-ying next week.

Chief Executive Leung said in an earlier press conference that the hunger strike is “futile” before telling the students to “take care.” The embattled pro-Beijing leader added that any dialogue proposing changes to the 2017 Chief Executive elections that strays from the Standing Committee of the National People’s Council’s (NPCSC) decision on Aug. 31 is “impractical.”

On Aug. 31, the NPCSC ruled that Hong Kong can have universal suffrage so long as a pro-Beijing committee elects candidates screened by Beijing. The Chinese Communist Party also reserves the final word on the election outcome.

Beijing’s decision angered pro-democracy supporters in Hong Kong, leading them to stage a huge rally near government offices in Tamar Park on Aug. 31. A week-long student class boycott in September culminated in an occupation of Civic Square on the 26th. Scholarism’s Joshua Wong and other students were arrested.

Riding on momentum generated by the students, co-founders of civil society group Occupy Central with Love and Peace brought forward their civil disobedience plan to hold areas outside government buildings and major arteries in the city to Sept. 28. After Hong Kong police wielded batons and fired tear gas to disperse the huge crowd in Admiralty, who used umbrellas as shields, tens of thousands of Hongkongers streamed into the streets, marking the start of the Umbrella Movement.
The mainly student demonstrators are asking for “true universal suffrage” for the inaugural 2017 Chief Executive elections as opposed to the Beijing-controlled version. They are also asking for hugely unpopular Chief Executive CY Leung’s resignation.

Nearly 70 days in, however, the protests are clearly flagging. The mass support for the protest slowly died down after the authorities seemingly adopted a “sit-and-wait” tactic to drag out the occupation and wear out the protesters and the public. In November, polls conducted by local universities reveal that the public wants the occupation to end even though they are still in favor of the movement’s goals.

The student protester camp is also being split between student groups like Scholarism and the Hong Kong Federation of Students and “frontline” protesters from various groups. The latter have accused the former of only making speeches, having poor planning, and not seizing the initiative to pile pressure on the government while support for the movement was still strong.

Meanwhile, the authorities leveraged on court injunctions granted to private companies to clear out a major protest site in Mong Kok, and brutally crushed an attempt to escalate the movement by surrounding government offices to prevent Leung and civil servants from reporting to work on Nov. 30. The following day, Hong Kong’s high court granted another injunction to a bus company for the clearing of the areas just outside the main Admiralty “Umbrella Square” protest site—the main site occupied by the students.

In announcing the hunger strike on Dec. 1. Scholarism’s Joshua Wong noted that it was an act of desperation from students who “no longer have the resources to escalate the protests.”

On Thursday, Federation of Students member Yvonne Leung said that the group will decide next week if they will stay or retreat from the streets.

In the midst of all the doom and gloom in the student camp, Mong Kok protesters have been steadily returning to the commercial district to partake in a mobile “Shopping Revolution,” which began shortly after police cleared their encampments on Argyle Street and Nathan Road.

The language used by the opponents gives a hint at the struggle taking place behind the scenes. Chief Executive Leung, a Jiang faction supporter,  says he will only negotiate with the Umbrella Movement according to Hong Kong’s Basic Law and NPCSC’s Aug. 31 resolution. That resolution was released by the head of the National People’s Congress, Zhang Dejiang, another supporter of Jiang Zemin.

Xi has avoided mentioning the NPCSC’s reform package for Hong Kong since it was announced, but has pressed Chief Executive Leung to explain how democracy will develop in Hong Kong according to the principle of “one country, two systems” and the Hong Kong Basic Law.