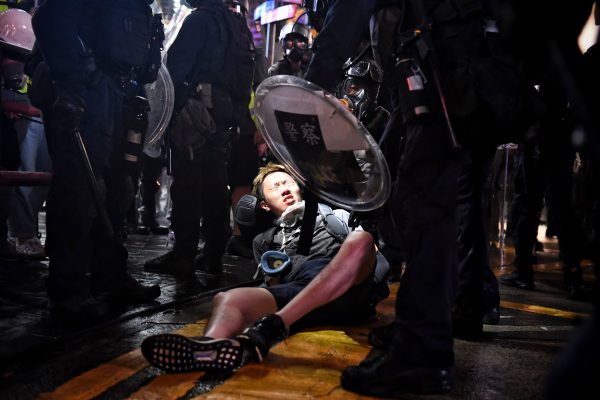 Volleys of tear gas and water cannons were deployed in the latest clashes between police and anti-extradition-bill protesters, marking another restive weekend in Hong Kong. In the late evening, police charged into subway stations in an attempt to arrest protesters, injuring unarmed passengers.

Tens of thousands of protesters poured onto the streets despite police banning a planned march on Aug. 31 and repeatedly warning citizens that they would be engaging in illegal assembly.

Just the day before, police arrested several prominent pro-democracy activists and lawmakers, raising concerns that the Hong Kong government was orchestrating a climate of fear to discourage protesters from coming out.

Candidates are currently hand-picked by Beijing and a 1,200-seat electoral committee comprising of mostly pro-Beijing elites that votes for the chief executive. Civil Human Rights Front originally planned a march to call for democratic, free elections and bring light to the government’s consistent dismissal of protesters’ demands in the extradition bill crisis.

Anger has been brewing over the now-suspended extradition bill, which would allow the Chinese regime to transfer individuals for trial in the mainland court system. Many fear that the bill would erode the city’s autonomy. In addition to the calls for greater democracy, protesters said they wish to see the bill’s full withdrawal and an independent inquiry into police use of force during recent demonstrations.

In the early afternoon, many joined a Christian group’s organized march to “pray for Hong Kong’s sinner [chief executive] Carrie Lam,” singing “Sing Hallelujah to the Lord,” which has emerged as an unofficial anthem since mass protests began in June.

Others gathered in the Causeway Bay shopping area or Chater Garden in the Central business district, braving the rain with their umbrellas.

In the evening, clashes between police and demonstrators broke the peaceful rhythm in the afternoon rallies, repeating the pattern of past weekend protests.

Police deployed water cannon trucks several times, unleashing blue-dyed water that would make it easier for police to identify frontline protesters. Police chased down protesters and beat them up with batons, injuring multiple people in the head. One person was injured in the left eye, reportedly by a police-fired projectile.

On Hennessy Road, where many protesters had gathered, police fired multiple rounds of tear gas and sponge grenades.

Police also confirmed that they fired two live rounds near Victoria Park. There were no reported injuries in the area. It is unclear why police decided to deploy their service weapons at the time.

Toward midnight, violence spread into subway stations in Kowloon district.

At the Prince Edward metro station and several other stations in Kowloon, police charged into the station and into train cars, deploying pepper spray and beating their batons. Officers arrested at least a dozen individuals. Several unarmed passengers were seen bleeding from injuries.

#HongKongPolice #HongKongProtesters
Hong Kong police rushed to metro, attacked and arrested citizen randomly, disregard you are protester or not. pic.twitter.com/nSqJQj6REN

According to local media In-media Hk, the police kept the trains door from closing, shouting that they needed to step up their force to deal with the “cockroaches” inside—what some police have used to describe protesters.

Reporters at the scene were denied access and prevented from conducting interviews.

The metro system suspended services for at least five major subway lines on Saturday night due to the police operations.

Young first-aid volunteer cries as he pleads police to open gate of MTR Station so he can take care of the injured inside.

“Let me in! I just want to help the injured! You can beat me to death later!”#AntiELAB #HongKong #PoliceBrutality pic.twitter.com/K6YJHaBk4R

Videos circulating online showed a first-aider pleading with police to allow him into the Yau Ma Tei Station to help injured passengers. The station gates were closed by police.

The police force issued a statement claiming that they entered the metro stations in order to stop protesters from vandalizing public property, although pro-democracy activists have disputed the validity of such claims.

Lam Cheuk-ting, a lawmaker from the Hong Kong Democratic Party, criticized the police for creating panic by employing force indiscriminately in such narrow and enclosed places as the trains.

Protesters also suspected that some police officers impersonated them. Several black-clad men were seen assisting in making arrests of protesters at the scene. In some videos and photos, black-clad men with guns and holsters were captured throwing petrol bombs.