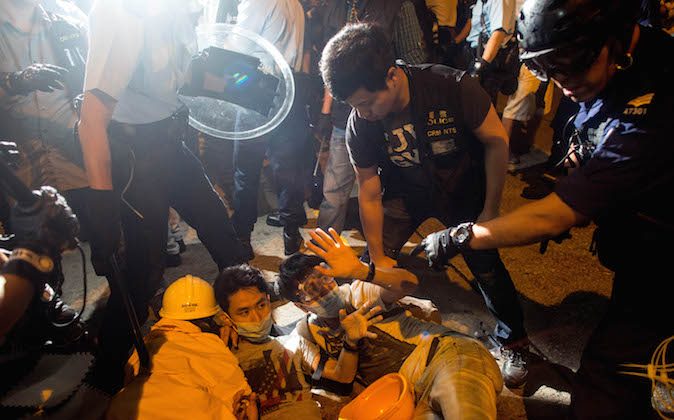 Hong Kong Protests Backlash: Kid Could Be Taken From Parents

A 14-year-old faces separation from his parents for taking part in the Occupy protests.

When Hong Kong’s top leader Leung Chun-ying warned student protesters that they “should think about the consequences of joining the occupation,” many were prepared to be arrested and perhaps endure a short lockup.

Possibly none of them envisioned being taken away from their parents.

During the clearing of occupied streets in the Mong Kok commercial neighborhood on Nov. 25, a 14-year-old boy — who name cannot be made known due to legal reasons — was arrested by bailiffs and police officers, along with about two dozen other protesters.

The boy was brought in front of a juvenile court judge after nearly 24 hours in detention. Instead of being charged for committing a crime — after all, he was participating in an illegal movement and disobeyed court orders for refusing to leave the occupied area — the teen was told that police will apply a protection order because his parent’s neglect had jeopardized his welfare.

“Nobody could believe that the case was brought forward: it’s completely out of order,” said Patricia Ho, the lawyer representing the boy, according to Bloomberg.

Protection orders are normally only applied in cases of extreme neglect, like when parents fail to stop the child from self-mutilating, for example.

Thus, the unusual application of the protection order can mean only one thing.

“The [authorities’] attitude, generally, is retributive,” Ho told the Guardian. “The government has shown a general stance of not wanting to get a lot of students arrested”

“But on the other hand, I think they want to make an example out of a few of them.”

Indeed, before bring brought to the judge, a police officer pulled the boy aside in the police station and told him that he would be moved to a boys’ home where he could be “controlled.”

The boy’s parents were not given separate legal representation at the hearing.

According to Bloomberg, the teen gained an interest in politics during the 2012 protests against the Chinese regime’s proposed national education curriculum.

After police used tear gas on protesters on Sept. 28 this year, he stayed over a couple of nights at protest sites to show support. Later, the boy would later return to his home, which is in one of Hong Kong’s poorer districts, and attend school daily.

If the protection order is successfully applied, it doesn’t bode well for at least some of the 955 people arrested for Umbrella protest related incidents.

Prominent student leaders Joshua Wong, 18, and Lester Shum, 21, are due to stand in court on Jan 15 next year after being arrested in Mong Kok on the same day as the 14-year-old. The three Occupy Central with Love and Peace co-founders, Professors Benny Tai Yiu-ting and Chan Kin-man and Pastor Chu Yiu-ming, have yet been charged after turning themselves in.

Seeing how the Hong Kong government is preparing to split up a family, there’s no knowing what sort of repercussion awaits the Umbrella Movement’s famous names and regular supporters.