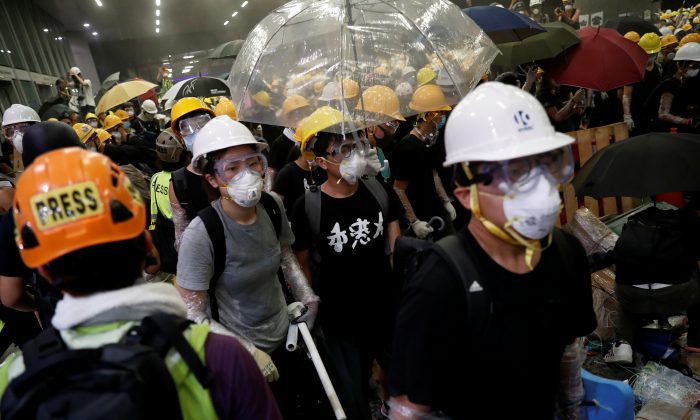 HONG KONG—Chaotic scenes of protesters rampaging through Hong Kong’s legislature, trashing furniture and daubing graffiti over walls have sent jitters through the business community, which worries about the impact on the city’s status as a financial hub.

Plumes of smoke billowed among gleaming sky-scrapers early on July 3 as police fired tear gas to disperse protesters in the heart of the Chinese-ruled city, home to the offices of some of the world’s biggest companies, including global bank HSBC.

Escalating unrest over a controversial extradition bill, which would allow people to be sent to mainland China for trial, grabbed global headlines and clouded the former British colony’s outlook as a finance hub, one of the city’s main pillars of growth.

“I think there will be damage to the reputation of Hong Kong,” said Yumi Yung, 35, who works in Fintech. “Some companies may want to leave Hong Kong, or at least not have their headquarters here.”

Around 1,500 multinational companies make Hong Kong their Asian home because of its stability and rule of law. Some of the biggest and most violent protests in decades could change that perception.

Hong Kong returned to the Chinese regime in 1997 under a “one country, two systems” formula that allows freedoms not enjoyed in mainland China, including freedom to protest and an independent judiciary. Monday was the 22nd anniversary.

Beijing denies interfering but, for many Hong Kong residents, the extradition bill is the latest step in a relentless march towards mainland control. Many fear it would put them at the mercy of courts controlled by the Communist regime where human rights are not guaranteed.

“If this bill is not completely scrapped, I will have no choice but to leave my home, Hong Kong,” said Steve, a British lawyer who has worked in Hong Kong for 30 years.

Daniel Yim, a 27-year-old investment banker, said both sides needed to sit down and work things out.
“I think the most effective way to address this will be that the government will … actually tackle this and speak to the people, and I guess, you know, both sides sit together and come up with … the appropriate solution.”

Others raised concerns about the future of human rights and the judiciary. Many did not want to use their full names.

“To me, the biggest worry is how Hong Kong is losing its independence bit by bit and is getting dangerously close to a country that doesn’t value human rights and that doesn’t have an independent judicial system,” said Edward, an Australian citizen who has worked in the financial sector for 10 years.

The extradition bill, now suspended but not scrapped, has also spooked some tycoons into moving their personal wealth offshore, according to financial advisers familiar with the details.

An Australian businesswoman who has worked in Hong Kong for 16 years lamented what she saw as the Chinese regime’s tightening grip.

“China is just taking away more and more freedom from Hong Kong,” she said.

Such concerns came as China’s top newspaper warned on July 4 that outbreaks of lawlessness could damage Hong Kong’s reputation and seriously hurt its economy.

Calm has returned for now, but the events of recent weeks have set many people thinking.