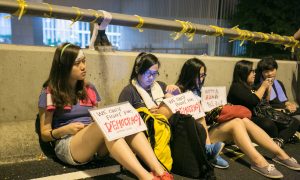 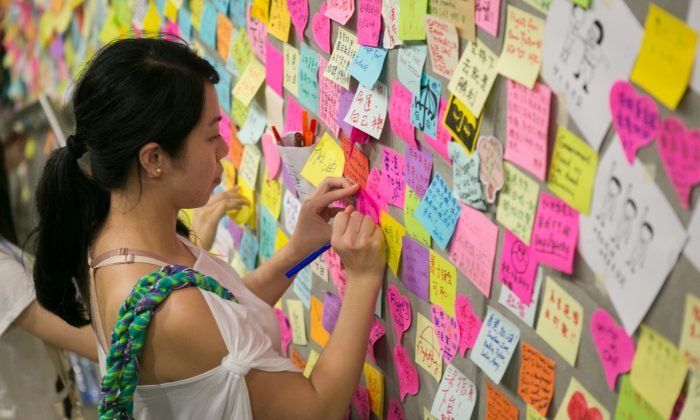 A woman leaves a note on a wall of the Legislative Counsel building in the Admiralty district of Hong Kong on October 2, 2014. (Benjamin Chasteen/Epoch Times)
Hong Kong

Xi Jinping’s path to reforming the Chinese Communist Party has met a roadblock in Hong Kong.

Since General Secretary Xi took power, his struggle to subdue the faction grouped around former Party head Jiang Zemin and that faction’s struggle to subvert Xi have dominated the Chinese regime.

Xi’s anti-corruption unit has remorselessly investigated cadres, and in a series of moves this summer has taken down one big “tiger”—a top-ranking Party official—after another related to Jiang. Meanwhile, Jiang loyalists have fought a series of increasingly futile rear guard actions.

With inspection teams setting up shop in Shanghai and intimates of Jiang Zemin being investigated, all signs have pointed to the biggest tiger of all—Jiang himself—being targeted for arrest.

The events in Hong Kong, with tens of thousands protesting for universal suffrage, appear to have forced an armistice in the ongoing war between the two camps.

Jiang has been rumored to be under virtual house arrest. He has for months been excluded from official events, and has been frozen out of coverage in the state-run media—signs of the Party’s attempt to marginalize the former paramount leader.

Of course, there is a surface plausibility to Jiang’s appearing on these occasions. This was the 65th observance of National Day, and the Party makes a big deal out of the anniversaries every five years, bringing out lots of retired officials.

And whatever happened at these social occasions doesn’t change anything. The Chinese Communist Party (CCP) is nothing but cold blooded. Xi can dine with Jiang Tuesday night and sign his arrest order Wednesday morning without a moment’s thought.

Nonetheless, Jiang’s appearance was entirely unexpected. The protests in Hong Kong pose such a grave threat to the CCP that they have changed the basis for political calculation. Xi can only ignore the events in Hong Kong to his peril.

In fact, Jiang Zemin’s faction has plotted all along to use Hong Kong to force Xi’s hand. Even as Xi has systematically stripped Jiang loyalists out of one stronghold in the Party and the economy after another, Jiang’s men have remained in charge in Hong Kong.

According to sources inside the Party, Zeng has worked through Leung to hatch a series of schemes meant to continually disrupt and antagonize Hong Kong society.

In June 2012 a mysterious group appeared in Hong Kong whose only purpose was the harassment of practitioners of the spiritual discipline of Falun Gong. Hong Kong’s police turned a blind eye to the group’s often illegal activities, and Party insiders revealed to Epoch Times that Leung was one of those behind the group’s activities.

Another mysterious group appeared that was devoted to harassing democracy activists. And yet another group appeared claiming to want to secede from the mainland. That group shares some members with the anti-Falun Gong group.

On Leung’s watch there have been a series of unprovoked, violent attacks on journalists and publishers in Hong Kong’s traditionally boisterous press.

High taxes that have driven rich developers out of Hong Kong and development plans that have angered the middle class have deepened the sense of misrule. Immigration from Hong Kong has recently soared.

While this series of events has inflamed Hongkongers desire to control their own affairs, the key to the ongoing crisis has been their hope for universal suffrage.

A White Paper issued by the State Council Information Office (also known as the Office of Foreign Propaganda) on June 10 alarmed democrats and ignited a spirit of resistance.

Henceforth, one country/two systems, which had been understood to provide Hong Kong with significant autonomy, was understood to mean whatever Beijing wanted it to mean. Further, the White Paper gave Beijing the power to change Hong Kong’s Basic Law—its constitution—however it liked.

In short, the White Paper undermined the basis for Hong Kong’s demand for democracy, the understanding that it operated under a different system than the mainland.

Remaining hopes for universal suffrage were quashed by a decision rendered on Aug. 31 by the Standing Committee of the National People’s Congress, the CCP’s rubber-stamp legislature.

That body is chaired by Zhang Dejiang. It stated that a nominating committee that is effectively under the control of Beijing would choose who would run for chief executive. There would be an election, but the people of Hong Kong could only vote for candidates chosen by the Party.

After the decision on universal suffrage, the civil disobedience movement Occupy Central for Love and Peace began putting into motion plans for protest. That Hongkongers would now take to the streets in large numbers was inevitable.

The years of misrule under Leung, the White Paper, the decision on universal suffrage—Jiang’s faction has counted on manipulating the people of Hong Kong into acts of resistance that would force Beijing into a violent crackdown.

Jiang Zemin was ushered into power in 1989 because of his willingness to support the Tiananmen Square massacre. Now, at the very end of his life, he and his faction seem to be setting the stage for another Tiananmen.

If the tanks were to roll in Hong Kong and thousands die, then Jiang’s faction could challenge Xi within the Party. Xi’s power—and with it his ability to purge Jiang’s faction—might be broken. Or Xi himself might even be unseated.

According to sources inside the Party, this is what Jiang’s faction has been up to these last few years in Hong Kong.

Xi has so far been unwilling to take the bait. A source inside the Party said Xi has given an order that there be no killing in Hong Kong. After one night of vigorous tear-gassing, the authorities seem to have stood down in their confrontation with the protesters.

Allowing Jiang Zemin to take part in the National Day festivities appears to have been a ploy to buy time. Xi’s bringing Jiang closer may help prevent Jiang’s faction from doing anything on its part to start a conflagration in Hong Kong.

Still, what Xi can do with more time is not clear. His room to maneuver is very tight. China’s economy has hit a wall. Large-scale protests are endemic in mainland China and, with the economy faltering, will get worse.

While Xi has succeeded in imposing his will on the Party with his anti-corruption campaign, he has no network of loyalists comparable to Jiang Zemin’s. The typical Party member, seeing Xi’s crackdown on graft threatening his livelihood, may prefer seeing Xi gone.

In this explosive situation, the example of the protesters in Hong Kong is viewed as a dangerous contagion. CCP officials wonder in which mainland city will tens of thousands of protesters suddenly materialize, inspired by the crowds in Hong Kong?

Meanwhile, the protesters have so far played their hand in the way that gives them the greatest leverage. Tear-gassed, they did not turn to violence. The protesters have been exemplary: calm, rational, tolerant. Support around the world has been growing.

In their current conduct, Hongkongers may have learned something from the Falun Gong practitioners among them.

When the persecution of Falun Gong began in 1999, on a daily basis Hongkongers could see how calmly practitioners responded to abuse hurled at them by mainlanders who had been deluded by Party propaganda. Eventually, that abuse ended as practitioners educated people about the Party’s lies.

When Leung’s group began harassing Falun Gong practitioners in 2012, their forbearance won over Hongkongers, who began to applaud and defend them.

The protesters have left open room for a deal. While insisting on the principle of universal suffrage, they say they do not oppose the CCP. This is a politic statement that should be taken with a grain of salt. It is made by individuals who have regularly carried banners denouncing the CCP.

Xi Jinping on his part has on a few recent occasions expressed his support for the principle of one country/two systems, implicitly rebuking the White Paper.

When Xi is ready to move forward, everyone expects that Leung Chun-ying’s head will roll. Dismissing him, or even arresting and purging him, is guaranteed to satisfy Hongkongers, who typically despise him.

But dismissing Leung can only seal a deal as a present to the Hong Kong people, it is not a solution.

Each day Xi tries to wait out the protesters, the power of their example of civil disobedience will grow among restive mainlanders, threatening the CCP’s rule.

If Xi gives in and offers universal suffrage, then the Hong Kong example becomes a precedent that mainlanders will appeal to as they, too, demand the right to vote.

If Xi is seduced by the alternative of violence, then he can expect challenges within the Party, condemnation around the world, and the possibility that desperate Hongkongers and mainlanders will see violence as the only option remaining.

Even if Xi himself continues to forswear violence, an accident in the crowded city of Hong Kong could set in motion terrible bloodshed that he could not control.

The protesters like to sing the Les Misérables hit, “Do You Hear the People Sing?” Others have pointed out that in the musical this song is performed just before the people are slaughtered at the barricades.

The people of Hong Kong know this. They know they are putting their lives on the line, and they believe freedom is worth the risk. Godspeed.