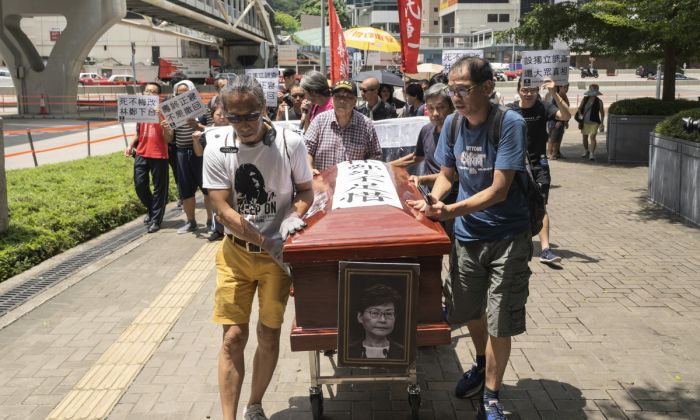 Protesters carry a mock coffin of city leader Carrie Lam as they parade against a controversial extradition bill around the government headquarters in Hong Kong on July 12, 2019. Lam on July 9 declared the legislation “dead,” but protesters insist that she formally withdraw the bill and quit. (Li Yi/The Epoch Times)
Hong Kong

The march marked the one-month anniversary of the start of major protests that have rocked the semi-autonomous Chinese territory, sparked by Lam’s proposal to change extradition laws to allow suspects to be sent to mainland China to face trial.

Last month, Lam suspended the bill indefinitely. On Tuesday, she declared the legislation “dead,” but protesters want her government to withdraw the bill formally and quit, among other demands.

Pro-democracy activist Leung Kwok-hung accused Lam of being arrogant, suggesting she has shown no remorse and refused to say introducing the legislation was a mistake.

“If you want Hong Kong to move forward, accept reality … step down,” he said.

The two dozen marchers were mostly older veteran protesters like Leung, in contrast to the students and other young people who have been at the center of the past month’s demonstrations.

They marched to a police barricade at a protest site and bowed their heads for a moment of silence to mourn several young people who have died in recent weeks, including a man who fell to his death after unfurling banners against the legislation and a woman who left a suicide message.

Hundreds of thousands have joined the weeks’ long protests that showed no signs of ending amid wider fears that Hong Kong is losing freedoms guaranteed when China took control of the former British colony in 1997. Critics fear suspects may face unfair and politicized trials in mainland China, and that critics of the ruling Communist Party could be targeted.

On July 1, the 22nd anniversary of Hong Kong’s handover from Britain back to China, a peaceful march drew hundreds of thousands of people. But it was overshadowed by an assault on the territory’s legislative building, where a few hundred demonstrators ransacked the building, spray-painting slogans on walls, overturning furniture and damaging electronic voting and fire prevention systems.

Tens of thousands of people joined the most recent rally on Sunday, seeking attention from Chinese in the mainland, where public dissent is banned and the state-run media have not covered the protests widely.

More rallies are planned this weekend at two shopping districts near China’s border that are popular with mainland Chinese visitors.

The Civil Human Rights Front, a key organizer of recent demonstrations, announced plans for another major rally on July 21.

Jimmy Sham, one of the front’s leaders, said the rally would highlight demands for an independent inquiry into alleged police brutality against demonstrators. The activists also want the government to drop its descriptions of the protests as “riots,” to release those arrested, and to move toward universal suffrage.

“Carrie Lam has lied to us again and again. We want to ask Carrie Lam, when are you going to speak the truth?” Sham said.

He said Hong Kong people must be allowed to vote for their leader. Beijing-appointed Lam, who is not directly elected, and her government haven’t acted in the people’s interest, he said.