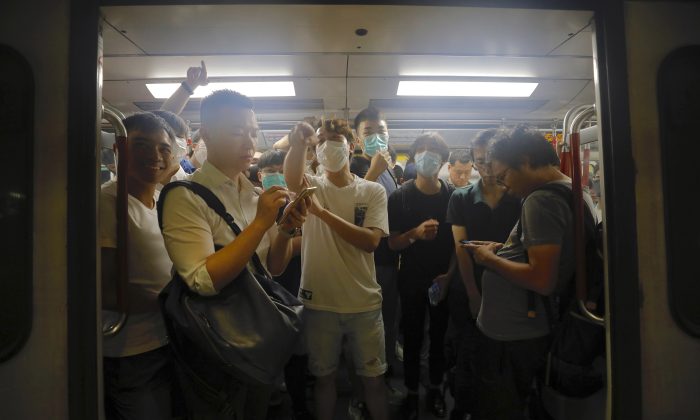 Protesters wearing masks occupy a train car at a subway station in Hong Kong on July 30, 2019. Protesters in Hong Kong have disrupted subway service during the morning commute by blocking the doors on trains, preventing them from leaving the stations. (Vincent Yu/AP)
Hong Kong

Service was delayed and partially suspended on the Island and Kwun Tong lines, subway operator MTR said. It cited “a number of train door obstructions” as well as someone activating a safety device at a platform on the Kwun Tong line.

The action targeted rush hour traffic at several stations. MTR responded by providing minibuses to replace delayed trains and normal service was restored by around noon.

Protester Ken Chan said he wanted MTR officials to explain why they allegedly failed to take action on July 21 when a large gang of men in white shirts brutally beat dozens of people inside the Yuen Long metro station as a massive protest was winding down.

“How could they let the triads in white attack people on the platform randomly, including the elderly and children in the train?” said Chan, 32, using the common term for members of organized crime groups. “Some of the elderly got smacked on their heads, but (MTR staff) turned a blind eye to it.”

Lorraine Lee, 26, said the subway disruption was an attempt to remind people of the government’s alleged failure to deal with social, economic and political injustices.

“The government has not been addressing the problems in our society,” Lee said. “That is why now Hongkongers have no choice but to use different ‘creative’ approaches to remind people what is happening in Hong Kong.”

AP video showed heated exchanges at Tiu Keng Leng station, where a crowd of protesters and commuters filled the platform and a stopped train.

The disruption is part of a pro-democracy movement that has seen hundreds of thousands take to the streets this summer for marches and rallies. The protests have shaken the government in Hong Kong and raised concerns in Beijing. Hong Kong is part of China but has a fair degree of autonomy in local affairs.

Posts on Twitter showed long lines of commuters waiting for free shuttle buses provided by MTR to other subway stops.

Activists began protesting in early June for the government to withdraw an extradition bill that would have allowed people to be sent to stand trial in mainland China, where critics say their legal rights would be threatened. The government suspended the bill, but the protests have expanded to calls for democracy and government accountability.

The protesters have demanded an independent inquiry into police conduct at the protests, which they say has been abusive.

By Katie Tam. The Epoch Times contributed to this report.