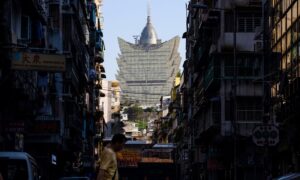 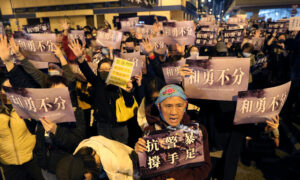 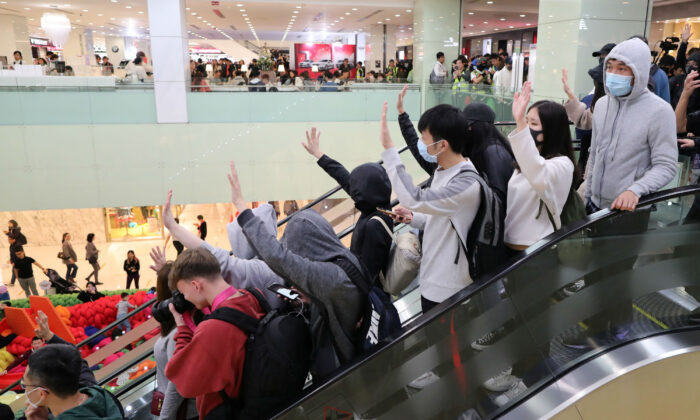 HONG KONG—Protesters convened inside shopping malls on Dec. 21 to commemorate an incident when thugs beat protesters and commuters inside a metro station, in addition to urging people to boycott pro-Beijing or pro-police shops this holiday season.

Over 100 protesters held a peaceful sit-in at Yoho Mall in Yuen Long, to mark the five-month anniversary of Yuen Long metro station attack, when white-shirted gangsters rushed into the station to indiscriminately beat up passengers, leaving at least 45 people injured.

The attack on July 21 and the police’s slow response to emergency calls—the police did not turn up for about 40 minutes—have angered protesters. The incident has since been widely criticized, including UK-based NGO Hong Kong Watch and Amnesty International.

At Yoho Mall, the sit-it began at 3 p.m. local time, and peaceful protesters repeatedly chanted different slogans, including “Five Demands, Not One Less,” “Disband the Police Force, No More Delay,” “Don’t Forget 721 [July 21],” “Police Collude With Gangsters,” and “Liberate Hong Kong, the Revolution of Our Times.”

Occasionally, slogans were chanted in English, such as “Fight for Hong Kong.”

A protester surnamed Leung explained to The Epoch Times why he had come to participate in the sit-in.

Leung questioned why the police did not come until 40 minutes later, and asked why police would pat on the shoulders of men clad in white who were wielding rattan canes as weapons.

According to Hong Kong media Stand News, police commander Li Hon-man was filmed patting the shoulder of a man in white on July 21.

“If people don’t protest, people will forget about what happened. Young people have inspired us to come out,” Leung said.

He added: “Coming out is better than doing nothing, sitting there and watching that ‘red’ TV channels,” a reference to pro-Beijing media outlets in Hong Kong.

Leung explained that he did not discriminate against mainland Chinese who had to swarmed Hong Kong since the Chinese Communist Party seized power, because they were fleeing the communist regime . And he said mainland Chinese might soon flee to Taiwan as well.

“If Hong Kong youth are done with this time, then the Chinese regime can broaden its power, and spread communism to the United States and the world,” he said.

He concluded: “China looks glitzy on the outside, but it’s not really like that. There’s dark things hidden underneath the surface.”

As the sit-in progressed, some protesters began to share information posted online about nearby police movement. Younger protesters were urged to leave first. Eventually, the sit-in was called off and a few protesters called for the demonstration to move to Genki Sushi outlet situated in the mall, which was labeled by protesters to be a pro-police establishment.

According to Hong Kong media, the windows of the Genki Sushi outlet were damaged, which prompted local police to enter the mall. Angry locals inside the mall shouted at the police, who responded by firing tear gas in an attempt to disperse them, local media reported.

Protesters have repeatedly targeted restaurants operated by Maxim’s Group, which includes Genki, after its founder’s daughter criticized protesters and defended the police in an appearance at the United Nations in Geneva in September.

A small group of protesters left Yoho Mall and took to the streets. At one intersection, a few smashed the traffic light using umbrellas and other tools.

According to Hong Kong media HK01, police again entered Yoho Mall in the evening, after some protesters sprayed paint on a Chinese tea brand store Heytea. Eventually, the police arrested at least 5 people.

Outside the mall, police in riot gear stood beside each entrance. There were 14 police vans parked along Canton Road as of roughly 6 p.m.

Protesters walked through the mall shouting in Cantonese, “love is stronger than hate. Distance yourself from police violence.” Police use of force has been a chief complaint of protesters since June.

They stopped by Starbucks, which is operated by Maxim’s, to post signs and stickers calling for people to boycott the coffee chain. At Sen-Ryo, a Japanese restaurant also operated by Maxim’s, protesters shouted angrily outside, though the shop had pulled down its shutters as customers ate inside.

Some luxury brand shops pulled down their shutters when protesters gathered nearby. Occasionally, store staff or shoppers would show solidarity with the protesters by putting up their palm (representing the five demands) or joining in their chants.

In front of another coffee shop, protesters encountered a man wearing an earpiece, whom they suspected to be a plainclothes police officer.

Protesters asked that he show his police identification, but he initially refused. He later displayed  his ID, showing he is assistant district commander Tsang Chung-bun.

The group occasionally followed Tsang around while jeering and yelling insults. At other times, they shouted slogans like ‘five demands, not one less,” “fight for freedom, stand with Hong Kong,” and “the heavens will eliminate the Chinese Communist Party, let all Party members die,” or sang the protest anthem, “Glory to Hong Kong.”

At one point, a group of roughly a dozen men and women wearing black facial coverings began walking around and following the protesters. Occasionally, Tsang could be seen directing the group. Protesters thus suspected that they were undercover police.

One middle-aged woman who said she was from mainland China began shouting at the group, “down with the Chinese Communist Party.”

Later, some in the group stopped and searched passers-by in the mall. At one point, they also brandished batons and pointed pepper spray canisters at media and protesters.

At around 6:30 p.m., a group of riot police entered the mall. Some used pepper spray while urging people to leave the premises, according to local media.