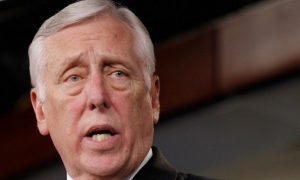 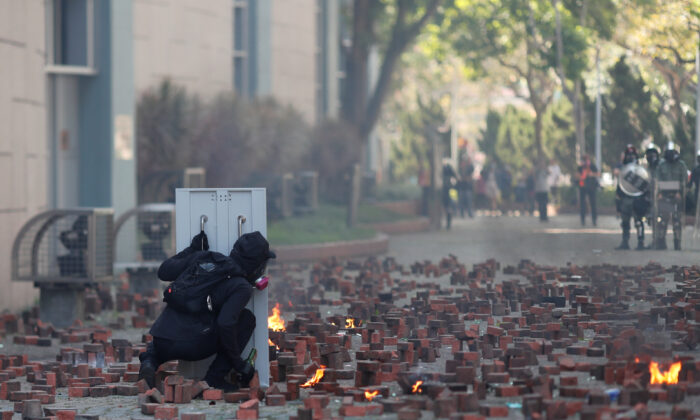 A protester hides behind a shield during clashes with police outside the Hong Kong Polytechnic University (PolyU) in Hong Kong, on November 17, 2019. (REUTERS/Adnan Abidi)
HK Current Affairs

HONG KONG—Fresh violence erupted around a besieged Hong Kong university campus on Nov. 17 morning, as protesters braced for a possible final police push to clear them after fiery clashes overnight.

Huge fires had lit up the night sky at Hong Kong Polytechnic University in Kowloon district hours earlier as protesters hurled petrol bombs, some by catapult, and police fired volleys of tear gas to force them up onto the podium of the red-brick campus.

After a few quiet hours as protesters slept on lawns and in the university library, police fired fresh rounds of teargas shortly after 10 a.m. local time. Activists hurled petrol bombs in return, some igniting trees outside the campus.

On Saturday, squads of Chinese soldiers dressed in shorts and T-shirts, some carrying red plastic buckets or brooms, emerged from their barracks in a rare public appearance to clear debris blocking key roads.

Parts of the campus looked more like a fortress on Sunday morning, with barricades and black-clad protesters manning the ramparts with improvised weapons like bricks, crates of fire bombs, and bows and arrows at the ready.

The campus is the last of five universities to be occupied, with activists using it as a base to continue to block the city’s central cross-harbor road tunnel.

The presence of China’s People’s Liberation Army (PLA) soldiers on the streets, even to clean up streets, could stoke further controversy over Hong Kong‘s autonomous status at a time when many fear Beijing is tightening its grip on the city.

Hong Kong did not request assistance from the PLA and the military initiated the operation as a “voluntary community activity,” a spokesman for the city’s government said.

The Asian financial hub has been rocked by months of demonstrations, with many people angry at the Chinese Communist Party’s meddling in the former British colony, which was guaranteed its freedoms when it returned to Chinese rule in 1997.

Clashes between protesters and police have become increasingly violent as the city grapples with its biggest political crisis in decades.

Efforts on Saturday to clear blocked roads followed some of the worst violence seen this year after a police operation against protesters at the Chinese University of Hong Kong on Tuesday.

The authorities have since largely stayed away from at least five university campuses that had been barricaded by thousands of students and activists stockpiling makeshift weapons.

Many protesters appeared to have left the campuses by late Saturday but Hong Kong‘s Cross-Harbor Tunnel was still blocked by protesters occupying Polytechnic University.

By Jessie Pang and Kate Lamb