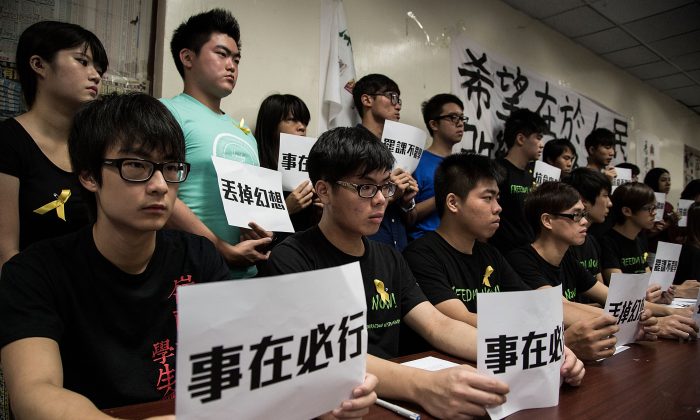 The three initiators of Hong Kong’s Occupy Central movement and 40 others shaved their heads on Tuesday to express their determination to fight for universal suffrage.

“Never resign to fate, never give up,” said Chan Kin-man during the head shaving. Chan, along with Benny Tai and Chu Yiu-ming, started Occupy Central. “Our most important mission is to promote civil society, to protect the essential value, and not to let the freedom and rights we have go backward,” Chan said.

The head-shaving protests the decision by the Standing Committee of the Chinese Communist Party’s rubber stamp legislature, the National People’s Congress, to continue the system of indirect elections for Hong Kong’s chief executive. That system assures that Beijing has effective control over the election results. The decision was made despite prior promises that Hong Kong would enjoy universal suffrage in the 2017 election for chief executive.

Benny Tai said that Occupy Central would not give in. Retreat was not possible, Tai said, and so they would fight against Beijing’s decision. Shaving their heads shows their determination, Tai said.

Among the participants of head shaving, two were women, including Tanya Chan, a former member of Hong Kong’s legislature, according to Voice of America. Chan said it’s her first time shaving her head, and she appealed to all of Hong Kong’s citizens to participate in Occupy Central.

Tai told VOA that a parade will be organized next Sunday appealing to more Hong Kong citizens to join the movement. The parade will work in concert with a week-long student strike protesting the denial of universal suffrage, which starts on Sept. 22.

The three organisers of Occupy Central with Love and Peace have their heads shaved on Sept 9, 2014, an action to show their determination to fight for universal suffrage. (Poon/Epoch Times)

Tai refused to release the date that Occupy Central protests will begin, fearing interference from the police, the report says. A source close to Occupy Central leaked to the Wall Street Journal that the action will take place sometime in October.