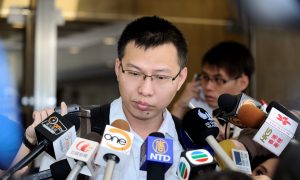 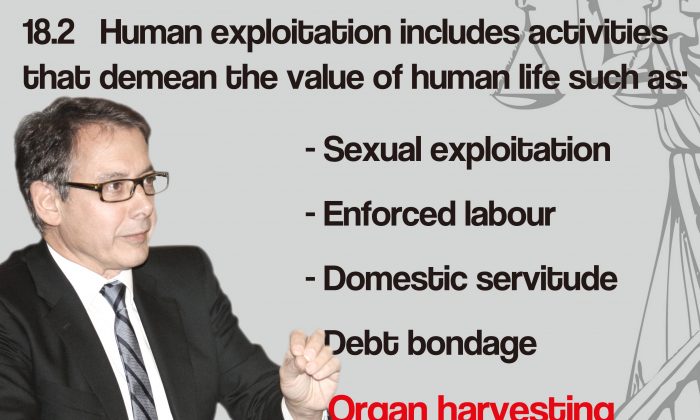 Rights of protesters emphasized by new code
By Lin Yi

HONG KONG—Prosecutors in Hong Kong have gotten a new set of guidelines. Some barristers believe the new guidelines, which include a section defining the rights of those taking part in assemblies, parades, and demonstrations, will help bring civil peace to the city.

On Sept. 7, the Department of Justice released a newly revised Prosecution Code 2013, which replaces The Statement of Prosecution Policy and Practice—Code for Prosecutors, published in 2009.

The new code has a new section on “Public Order Events,” which quotes Hong Kong’s Basic Law regarding the fundamental rights of Hong Kong citizens: “Article 27 of the Basic Law guarantees Hong Kong residents ‘freedom of speech, of the press and of publication; freedom of association, of assembly, of procession and of demonstration.’”

The section stresses that the authorities, besides having the duties of keeping public order and protecting citizens’ personal and property safety, also has a “positive duty to take reasonable and appropriate measures to enable lawful assemblies to take place peacefully.”

The section on Public Order Events cites as precedent the case of Yeung May-Wan & others v Hong Kong Special Administrative Region, decided by the Court of Final Appeal in May, 2005.

The case stemmed from a demonstration by 16 Falun Gong practitioners in front of the Liaison Office of the Central People’s Government on March 14, 2002. The 16 were arrested on the charge of obstruction of a public place. Eight of those were then subsequently charged with obstructing police officers.

The Court of Final Appeal threw out all charges on the grounds that the police had not used the standard of “reasonableness” in evaluating the demonstration outside the Liaison Office.

The new code emphasizes that the Department of Justice should lay charges only when “relevant conduct exceeds sensible proportions or the bounds of reasonableness.”

The prosecutor in the case of Yeung May-Wan & others v Hong Kong Special Administrative Region was Kevin Zervos who, as Director of Public Prosecutions of the Department of Justice, released Prosecution Code 2013 two days before his retirement.

Prosecution Code 2013 also has a new section on “Human Exploitation Cases” which references the Universal Declaration of Human Rights. The section reminds prosecutors that cases involving human trafficking “should be handled by prosecutors with an appropriate level of understanding, skill and sensitivity.”

According to the section, “Human exploitation includes activities that demean the value of human life such as sexual exploitation, enforced labour, domestic servitude, debt bondage and organ harvesting.”

This is the first known mention of organ harvesting in a document published by the Hong Kong Department of Justice. This atrocity is particularly sensitive because of the widespread forced organ harvesting from prisoners, particularly prisoners of conscience, that takes place in mainland China, despite international condemnation.

Some Senior Counsels—a Senior Counsel is barrister with at least 10 years experience who has been nominated to join the “inner bar”—welcomed the new code’s urging the police to respect human rights, which they believe will help reduce social conflict.

One of those is Ronny Tong, who is also a member of the Legislative Council. He said: “Hopefully, the code could reduce conflicts in the society in Hong Kong, and this will be the case if everybody pays attention to the relatively detailed new code, especially when it lists in detail the consideration factors relating to public interests.”

“When some importance is placed on human rights and public interest, I hope that prosecutors should be correct and pay more respect to human rights when they consider prosecution.”

Ronny Tong cautioned that the Prosecution Code 2013 “is not the law, and it only serves as a guideline for front line officers who are keeping public order. It is still too early to say whether the police will restrain themselves from laying charges, and it depends on how the front line officers understand the code.”