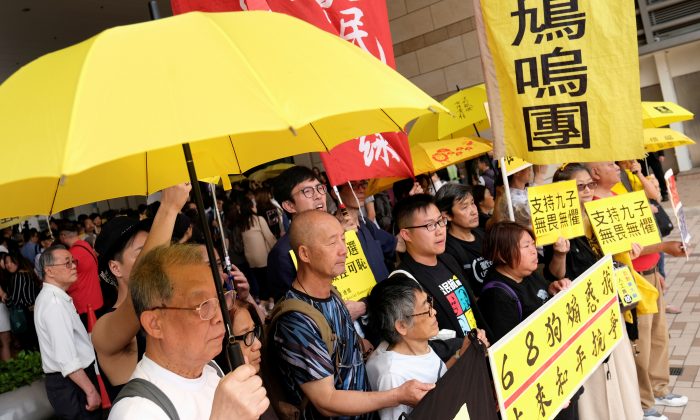 HONG KONG—A Hong Kong court on April 9 found nine leaders of the 2014 pro-democracy “Occupy” movement guilty of public nuisance during the mass protests, in a landmark verdict as freedoms in the city ruled by mainland China come under strain.

Scores of supporters applauded the defendants, who included a law professor, two legislators and former student activists, after a trial that critics said highlighted the decline of political freedoms in the former British colony.

The trio had pleaded not guilty to all charges, which carry a maximum jail term of seven years each. The judge did not immediately hand down sentences, and the defendants have not said if they planned to appeal.

“I am determined to fight for Hong Kong with one last effort, and to walk with Hong Kong people one step further,” Chu said in a passionate final speech in court, despite being in poor health.

“We have no regrets … we have not given up,” he said, moving some witnesses to tears, and spurring sustained applause from supporters.

Outside the court, some punched their fists in the air and shouted, “We want universal suffrage.” Others sobbed as supporters called them “fearless and invincible.”

The concept of civil disobedience is “recognized in Hong Kong,” Justice Johnny Chan said in a summary of his judgment, but it was not a defense against a criminal charge.

“The offense of conspiracy to cause a public nuisance does not have the undesirable effect of curtailing or suppressing civil disobedience at its formation stage or suppressing human rights as the defendants contended,” it read.

Since the city returned to Chinese rule in 1997, critics say Beijing has reneged on its commitment to maintain Hong Kong’s high degree of autonomy and freedoms under a co-called “one country, two systems” arrangement.

In Beijing, Foreign Ministry spokesman Lu Kang told a regular news briefing that the central government supported the move “to punish, according to law, the main … plotters of the illegal Occupy (movement).”

In the nearly five years since the Occupy protests, democracy activists, diplomats, and business leaders have expressed grave concern over what they call Beijing’s tightening grip on the city’s freedoms.

Pro-democracy lawmakers have been kicked out of the legislature, a pro-independence party banned, and democracy advocates jailed and barred from contesting local elections.

They were each found guilty of at least one public nuisance charge.

All nine were accused of inciting and mobilizing protesters during the demonstrations that sought to pressure Beijing to allow full democracy.

Hundreds of thousands of people blocked major roads in several parts of the global financial hub for 79 straight days in late 2014, in one of the boldest populist challenges against Beijing in decades.

The demonstrators were finally cleared away by police, having won no concessions.

Tai, Chan and Chu were the main conspirators who planned the protests a year in advance, said David Leung, the director of public prosecutions, adding that they caused “unreasonable” public disruptions.

About 87 percent of roughly 1,200 protesters polled during the demonstrations said they had participated to “protect Hong Kong’s liberty,” a public opinion poll by the Chinese University of Hong Kong cited in court showed.

But in his 268-page judgment, Chan said, “It is naive to suggest that a concession to introduce the form of universal suffrage … could be made by the government overnight with a click of the fingers.”

By James Pomfret and Jessie Pang