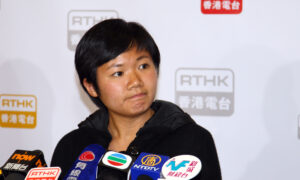 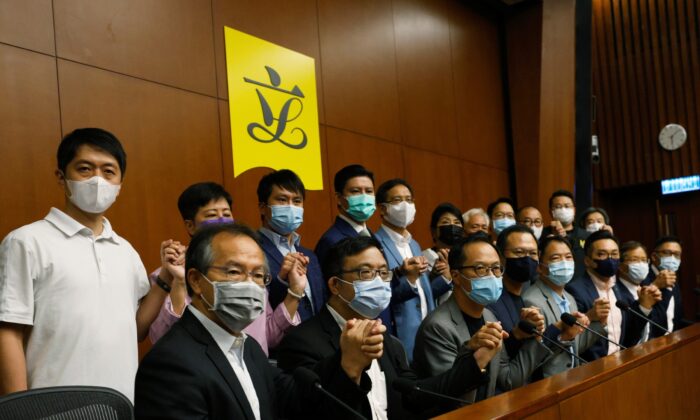 Pan-democratic legislators including Alvin Yeung, Dennis Kwok and Wu Chi-wai join their hands during a news conference as they threaten with mass resignations amid reports on Beijing plans to disqualify four opposition lawmakers, in Hong Kong, China, on Nov. 9, 2020. (Tyrone Siu/Reuters)
Hong Kong

HONG KONG—Hong Kong pro-democracy legislators threatened mass resignations on Nov. 9 amid reports Beijing plans to disqualify four opposition lawmakers who had been accused by the ruling camp of potentially unlawful filibustering in the legislature.

Earlier on Monday, local news site HK01 reported, citing unnamed sources, that Beijing might make the move later this week in the latest squeeze on opposition politicians in the former British colony.

The four have been accused by pro-Beijing politicians of filibustering to obstruct legislation, which has long been a tactic in Hong Kong. Some pro-Beijing lawmakers say it may be contrary to the oath of office.

The report did not detail a specific incident or incidents of alleged attempts to obstruct legislation, nor say what legal mechanism Beijing would use to disqualify them. The Hong Kong government did not immediately respond to a request for comment.

“We would like to use the mass resignation on one hand to reflect our unity and on other hand to reflect the tyranny of the central government and the HKSAR,” said Wu Chi-wai, chairman of the Democratic Party.

The pro-democracy camp currently has 19 seats in the 70-seat legislature.

The speculation comes a week after eight prominent opposition politicians were arrested in connection with a meeting in the Legislative Council in May that descended into chaos.

The four identified by HK01 as the names being considered for disqualification—Alvin Yeung, Dennis Kwok, Kwok Ka-ki and Kenneth Leung—were not among those eight.

The four had been among 12 candidates disqualified from running for an election for the city’s legislature, initially scheduled for September, but postponed for a year with authorities citing coronavirus risks. The terms of all lawmakers were extended by a year.

Authorities in Hong Kong and Beijing have moved swiftly to crack down on dissent in the global financial hub after pro-democracy protests that flared in June last year plunged the city into its biggest crisis in decades.

Critics of the Beijing-backed Hong Kong government have accused it of stifling freedoms in the city and slammed the postponement of election in September in which the pro-democracy opposition hoped to make significant gains.

The election would have been the first since Beijing imposed a contentious national security law on Hong Kong on June 30.