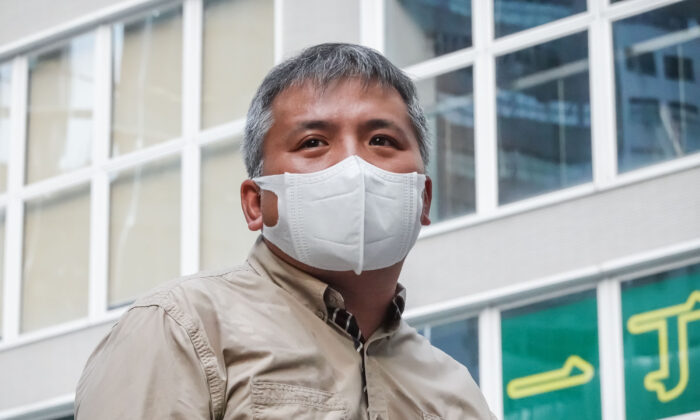 With the Red Terror looming over Hong Kong and a precipitous plunge in press freedom ranking, no one is running for the next chairman of the Hong Kong Journalists Association, and incumbent Chairman Ronson Chan Long-sing becomes the sole candidate. (Adrian Yu/Epoch Times)
HK Current Affairs

On June 25, 2022, Hong Kong Journalists Association will count the votes for the 2022-2023 executive committee election and the motion to amend the constitution.

Ronson Chan Long-sing, the association’s chairman, had previously said he would not “actively seek to be reelected.” He on June 16 that “being at HKJA is like riding the waves … on a lonely island.”

In the past, Ronson Chan was greeted, with the expression, “Brother Sing, Brother Stand News!” by the public and his peers whenever he showed up to live stream on the front lines of the Hong Kong anti-extradition protests in 2019.

As the ranking of Hong Kong’s press freedom index fell off the cliff, no one was nominated to be the next chairman of the Hong Kong Journalists Association—except Chan.

Chan’s policy manifesto includes maintaining the dignified existence of HKJA, as well as protecting its members and staff. This is almost a mission impossible, for a media company that has been slashed and thrashed by the pro-government, state media agencies.

In Chan’s strategy, he presents a desire to consult with the authorities on vehicle registration, indictments, and business registration inquiries and to fulfill media workers’ daily needs. Chan also plans to provide more protection and training for independent reporters and citizen journalists.

Chan graduated with his Form 7 diploma from Kowloon Wah Yan College in 2000. Chan joined the media industry in 2003. He used to work for Wen Wei Po, Ming Pao, and Oriental Daily before moving to FactWire in 2016. One and a half years later, he switched to the now-dissolved news agency Stand News and became one of the most popular journalists in Hong Kong.

In his 17-year career as a journalist, Chan has covered many lead stories: South Korean Farmers Protests, Queen’s Pier Conservation Incident, Anti-Express Rail Link Movement and Occupy Central Movement. Since 2019, Chan has marched onto the front lines for Hong Kong, day in and day out, to report the truth.

At the time, Hong Kong civilians and protesters had become targets of police brutality. Reporters, photographers, and cameramen were also on the cusp of the conflict.

They went from behind the scene to the front of the line, witnessing and documenting the history, while also standing alongside Hongkongers who had been fighting for democracy, rule of law, and freedom.

Reporters were often met with police batons and their pushes, sometimes even served with tear gas bombs, when they tried to find a better filming angle.

After the closure, Chan joined online media Channel C in February, while he prepared for his six-month learning journey in the Scholar Program, organized by Reuters Research at Oxford University in the UK. He planned to return to Hong Kong for his journalistic work after the trip.

“From the first day of working as a journalist, I have never chosen to emigrate or leave Hong Kong for a long time to further my study,” Chan said in an interview with Radio Free Asia. Chan had already made a choice, “I choose to stay in Hong Kong, to breathe the same air and share the same destiny with Hongkongers.”

On June 9, 2022, Chan shared an article of his on Facebook, titled, “The Past Beneath the Smoke”.

Chan looked back on his front-line days in 2019, of three years ago. It was on the first day of the beginning of the anti-extradition movement. That night he stood outside the Legislative Council with his iPad, broadcasting live.

Hong Kong Police not only dispersed the crowd, but also the reporters on site.

The police eventually subdued all the civilians in the crowd by the old police station in Wan Chai.

“I would have never thought that Hong Kong would become so different after the sunrise that day.”

Since June 2021, Hong Kong’s independent media outlets Apple Daily, Stand News, and Citizens’ News had been forced to shut down operations one after another. The authorities arrested lots of journalistic workers and media executives for violating the Hong Kong National Security Law. Most of them have been locked up in jail for over a year without having a single hearing or trial yet.

On May 3, 2022, Reporters sans frontières (RSF), also known as reporters without borders, published the latest World Press Freedom Index. In the review, Hong Kong’s previous ranking of.80, sank to 148, which makes it a record low for Hong Kong. The drop was far greater than in any other country or region. Hong Kong’s current ranking is even lower than some third-world countries such as Rwanda, Zimbabwe, Cambodia, and Libya.

Cedric Alviani, executive director of Reporters sans frontières of the South East Asia Chapter, said the sharp deterioration in press freedom in Hong Kong was not surprising at all; it is a predictable misfortune. Alviani told Agence France-Presse (AFP), “Over the past year, we have seen extremely heavy-handed, volatile actions against journalists in the city. The rule of law in Hong Kong is gradually vanishing.”