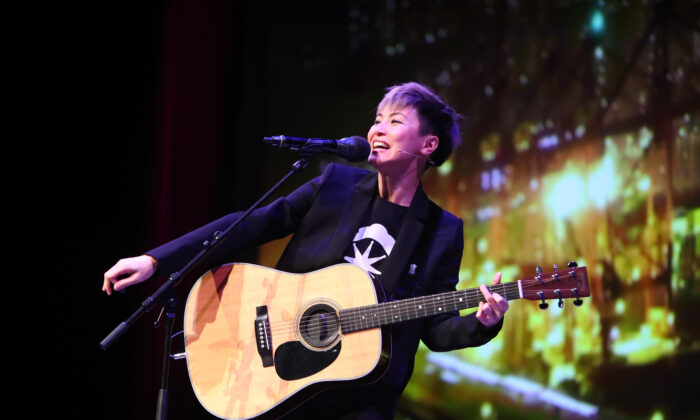 NEW YORK—Hong Kong singer Denise Ho was met with a standing ovation on Oct. 24 in New York City’s Town Hall, where she and 10 other activists recounted their experiences challenging repressive regimes.

Hong Kong, a former British colony, was returned to Chinese rule in 1997 with the guarantee that it retains the same degree of freedom and autonomy for the next half a century.

Since June, millions of Hong Kongers have marched against an extradition bill that they saw as a gateway for Beijing to further intrude in the city’s affairs. Protesters’ demands have since expanded to incorporate calls for greater democratic reform and universal suffrage.

“Who would have thought that Hong Kong, being this financial city where people previously only come up once in a while to protest, would become this most symbolic global icon of resilience in this year of 2019?” Ho, who has been a passionate advocate for the movement throughout, said to a packed audience of hundreds at the Oslo Freedom Forum.

The Hong Kong authorities formally withdrew the bill on Oct. 23, but to many, the decision was too late.

Ho showed picture after picture of protester injuries during clashes with the police, who have escalated their aggression as the protests have gone on: a journalist and a first-aider who suffered severe eye injuries after being shot by police pellet rounds, an 18-year-old protester shot by gunfire at point-blank range, and people facing police searches and being beaten for wearing protester gear.

Police have fired thousands of tear gas canisters and arrested over 2,600 people since the start of the protest.

Ho, rally organizer Jimmy Sham, and local lawmakers have all experienced mob attacks for their support of the protests.

“In the course of just four months, we have become a very different Hong Kong, and our demands have been clear and simple since day one: We want justice, we want freedom, and we want reform,” Ho said.

Unless these issues are addressed, there will be “no turning back to normal,” she said, adding that many Hongkongers believe that the extradition bill was the final straw in a battle between two different value systems: the mainland authoritarian regime and one that was moving towards democracy and had rule of law.

“The CCP [Chinese Communist Party] just could not comprehend why Hong Kong just would not back down,” Ho said. “We are not just another Chinese city. We are this very diverse city that embraces different cultures. We have held dear to our transparent institutions, our legislative and judicial system, and the freedom of expression.

“When these are ripped away from us, although we have not been known as the very revolting kind, we will fight back, and we fight hard,” she continued.

The fight, she emphasized, was not just between Hong Kong and Beijing, but tyrannies and the free world.

Just as with its handling with Hong Kong, the Chinese regime is now “working very hard to push their rules and priorities” in the West, she said, naming the NBA (National Basketball Association), Blizzard, Vans, and Apple among the latest examples of U.S. corporations succumbing to Beijing’s political pressure and silencing themselves on the Hong Kong issue.

“For anyone who believes that the world should be free, open, and civil, it should be alarming,” Ho said.

She led the crowd in chants of “Reclaim Hong Kong, revolution of our times,” a popular protest slogan, before singing a Cantonese song “Polar,” which paints a picture of people setting out on a journey for light while surrounded by darkness.

“Stand strong for everything you believe in. You are not alone in this fight,” she said to those who stand with Hong Kong.