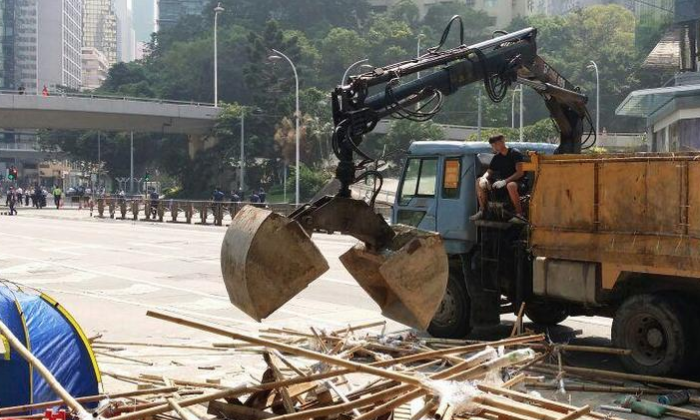 A truck removes the remnants of barricades erected by pro-democracy demonstrators on the Queensway Causeway in Hong Kong on the morning of Oct. 14, 2014. (Matthew Robertson/Epoch Times)
China

HONG KONG—Hong Kong police removed some barricades on Tuesday from the edge of pro-democracy protest zones that have choked off roads for weeks, the second straight day they have taken such action and signaling their growing impatience with the student-led demonstrators.

Dozens of police used electric saws and bolt cutters to dismantle the bamboo barriers that pro-democracy protesters had erected overnight after an angry mob led by a few dozen masked men tried to storm the barricades the day before.

Police also cleared out protesters’ tents and took down other makeshift barricades of plywood, trash cans and items collected by demonstrators to block a busy road on the periphery of the main protest zone in the former British colony.

Police negotiated with one last protester—who said he had an injured leg—to leave his tent.

The bamboo and tents were scooped up into the back of a dump truck while the barricades and other safety barriers were piled into trucks and vans.

Hundreds of other officers held back protesters and bystanders watching the scene in front of the upscale Pacific Place shopping mall near the heart of the city’s financial district. Some protesters chanted, “Triads!” —a reference to allegations vehemently denied by police that they have been working with organized crime gangs.

Earlier, police also moved in on a separate protest zone blocking a busy road in the Causeway Bay shopping district to clear a lane of traffic. The dawn operation mirrored one police carried out on Monday to trim the edges of the main protest zone and a third one in busy Mong Kok across Victoria Harbor in Kowloon.

The Hong Kong government said in a statement that police took action to remove the barricades, which were also reinforced at points with concrete, “to ensure public safety and maintain public order.”

The protesters, led by university students, are demanding that Hong Kong’s deeply unpopular Beijing-backed leader, Leung Chun-ying, resign. They also want the government to drop plans for a pro-Beijing committee to screen candidates in the territory’s first direct elections, promised for 2017. They have occupied sections of roads in three main areas in Hong Kong since Sept. 28 in a civil disobedience movement.