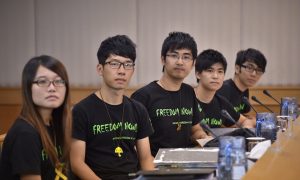 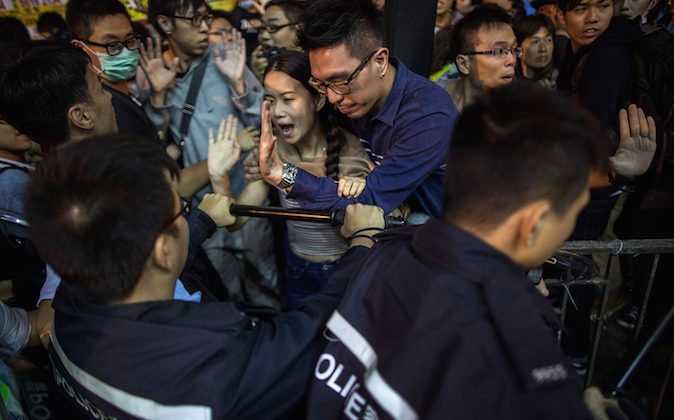 Pro-democracy protesters and pedestrians clash with police on a street in Mong Kok on November 26, 2014 in Hong Kong. (Lam Yik Fei/Getty Images)
China

Following the clearing of a pro-democracy encampment in the neighborhood of Mong Kok on Wednesday morning Hong Kong time, the area again became the site of conflict with the police in the evening.

For two months a stretch of Nathan Road in the gritty working-class neighborhood had been held by Umbrella Movement protesters, but they were pushed out by noon Wednesday, as police declared the major thoroughfare open to traffic.

But from around 7:00 to 7:30 p.m., police suddenly returned in force to lockdown the areas around Sai Yeung Choi Street, which is adjacent to the recently cleared Nathan Road and Argyle Street.

The increased police presence was the result of an incident outside the Bank Center Mall on Nathan Road, South China Morning Post reports. Police drove people suspected of holding an illegal assembly to Nelson Street at around 7:00 p.m. A commotion ensued and police reinforcements were called in. At least two people were arrested, and police raised red flags warning the crowd not to charge or they will face police action.

After police closed off some roads, the large crowd that gathered in the area spilled over into Sai Yeung Choi South Street. At this point, many shops in the area closed their shutters.

Police prevented passersby from crossing the street, demanded people show their identification, donned riot gear at some points in the night and made more arrests, according to observers on the ground.

Police also behaved aggressively towards journalists there and the ever-increasing crowd, who claimed they were in the area for “shopping.” The crowd, which appeared to consist mainly of pro-democracy supporters, taunted the police and chanted “I want true universal suffrage” and “We want to shop!”

Observers noted that the people switched to the Mandarin dialect of Chinese that is the common language in mainland China, instead of the Cantonese dialect native to Hong Kong, during the “shopping” chant, possibly to mock Chinese mainlanders who frequent the shops there.

The “shopping” chant is likely a response to a press statement on Tuesday, Nov. 26 by hugely unpopular Chief Executive Leung Chun-ying. Leung told Hong Kong citizens to return to Mong Kok and shop after authorities cleared the protest site to boost flagging businesses in the commercial neighborhood.

As the night wore on, the crowd, which numbered in the hundreds at its peak, moved from the cramped pavements on Sai Yeung Choi Street to the nearby Nathan Road, Argyle Street, Soy Street, and Shantung Street. Police likewise spread out to those areas to prevent people from crossing roads and from reoccupying Mong Kok.

Reports of police violence trickled out via social media throughout the night. In a Facebook post, pan-democratic legislator Fernando Cheung described witnessing a “mad” police action where police suddenly lashed out at the crowd before pinning a male youth to the ground and brutally beating him. Cheung later found out that someone in the crowd had shouted “corrupt police” right before the incident.

Cheung attempted to persuade the police that the crowd meant no harm and were only there to “shop” as per the Chief Executive’s instructions, but was curtly told to “go home to care for (his) women” by the officers on duty.

Although the pro-democracy protesters are known for returning in force at night to reclaim ground gained by police during the day at several points in the protests, the “shopping” incident tonight does not look like a major reoccupation attempt.

By about 1:00 a.m. on Thursday, only about a hundred people were left on a segment of Sai Yeung Choi Street and connecting junctions near Argyle Street, Soy Street and Nathan Road.