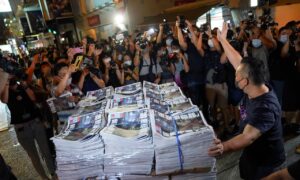 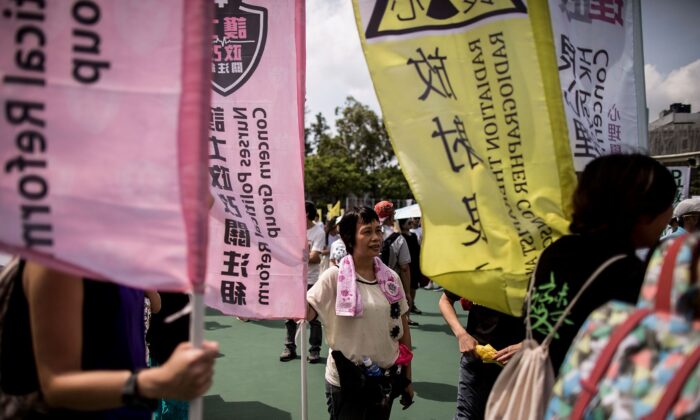 A protester holds a flag ahead of the pro-democracy march in Hong Kong on July 1, 2015. (Anthony Kwan/Getty Images)
Hong Kong

Tens of thousands of residents have traditionally marched on July 1 to demand everything from greater democracy to a solution to one of the world’s most expensive property markets.

This year’s anniversary is particularly sensitive as it coincides with events to mark the centenary of the Chinese Communist Party, with dozens of Hong Kong officials traveling to Beijing to join celebrations.

In a notice sent to the organizers—the League of Social Democrats, Tin Shui Wai Connection, Save Lantau Alliance—and seen by Reuters, police said that given rules on gatherings of more than four people, any rally would cause “great risk to citizens’ lives and health, harming public safety and affecting others’ rights”.

Police also told the organizers anyone who defied the ban could face jail for up to up to five years.

A police spokesman was not immediately available for comment.

The organizers said they would appeal against the decision to a board on public meetings and processions.

Civil Human Rights Front, which has traditionally set up the annual rally, said this month it would not do so this year due to administrative difficulties and the city’s political environment, Hong Kong media reported.

The demonstration last year was banned for the first time in 17 years, with police also citing coronavirus restrictions. Thousands defied the ban and took to the streets to protest against a sweeping national security law imposed on the city just hours earlier by Beijing.

Critics of the government have accused it of using social distancing measures to block rallies after anti-government protests in 2019. The government rejects the accusation.

Some activists have questioned why the rally was banned when concerts, art fairs and other events were allowed to go ahead despite an official ban on large gatherings.

Authorities this year also banned an annual June 4 vigil to mark the 1989 crackdown on pro-democracy activists in and around Beijing’s Tiananmen Square, implementing a security operation to prevent people gathering.