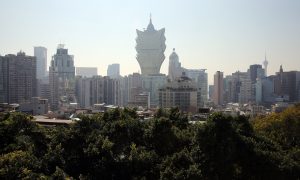 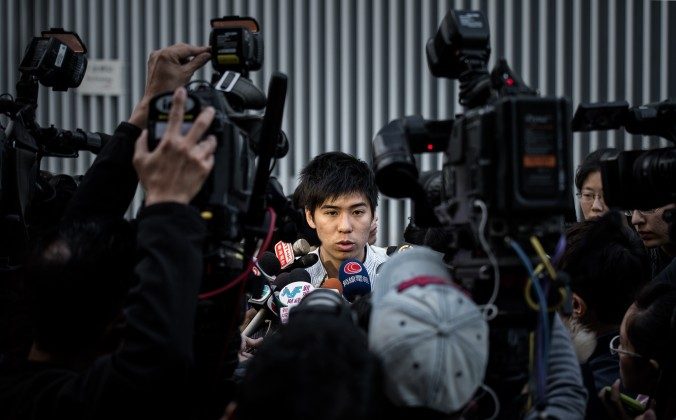 Lester Shum, one of the leaders of the Federation of Students, talks to the media outside the government building in Hong Kong on Jan. 6, 2015. (Philippe Lopez/AFP/Getty Images)
China

“Report to police headquarters to assist investigations.” That’s what Hong Kong police told some prominent democracy protesters over the phone earlier this week.

So far, 32 key protest leaders have been charged with “inciting an illegal assembly,” and will have to turn themselves in to the police by the end of next week.

In total, about 1,500 people could be prosecuted for participating in pro-democracy demonstrations in 2014, according to Hong Kong media.

Of the 1,500 people said to be targeted, 955 were arrested during the nearly three-month long Occupy Central protests. The street occupations started on Sept. 28 after police fired tear gas into a largely student crowd outside government headquarters in Admiralty. Afterwards, the pro-democracy demonstration was dubbed the “Umbrella Movement” because protesters had used their umbrellas to ward off tear gas and police batons.

Protesters who participated in an Occupy Central “rehearsal” have also been earmarked for arrest. On July 2, more than 1,000 students from the Hong Kong Federation of Student (HFKS), Scholarism, and other student groups held a sit-in in Hong Kong’s central business district. Police hauled away 511 protesters, but later released them all without charge.

Student and pro-democracy groups started to campaign in earnest for greater democracy in Hong Kong after the Chinese communist regime’s rubber-stamp legislature passed a controversial ruling on Aug. 31.

The Standing Committee of the National People’s Congress (NPCSC) decided that Hong Kong residents will be allowed to choose their city’s leader by universal suffrage as outlined in the Basic Law, Hong Kong’s governing document, for the 2017 Chief Executive elections. However, a pro-Beijing nominating committee will screen the eligible candidates, and the Chinese regime has the final say on the office holder.

Angered by the NPCSC’s attempt to hijack democratic reform in the semiautonomous city, Hongkongers held a mass rally on Aug. 31, and a September week-long class boycott by students led to the 79-day-long street occupation.

Hundreds of thousands of protesters took to the streets in the neighborhoods of Admiralty, Mong Kok, and Causeway Bay at the Umbrella Movement’s peak, but public support slowly dwindled after the first month. Overall, 1.2 million people joined the protests, the Chinese University of Hong Kong estimates.

“We must still plow ahead in the coming year to change our future.”
— Joshua Wong, student protest leader

The Hong Kong and Beijing governments declared the street occupation “illegal,” but chose to clear the protest sites indirectly through court injunctions granted to private companies. Embattled Chief Executive Leung Chun-ying promised that protesters would be dealt with “resolutely” in a number of statements before the clearance.

Police commissioner Andy Tsang also said that “principle instigators” of the Occupy protests would be rounded up within three months after the authorities evicted protesters from the last major encampment in the Causeway Bay retail district on Dec. 15.

With the recent round of police phone calls, the Hong Kong authorities appear to have started the first phase of formal prosecution.

Most of the protest leaders who have received summons appeared largely unruffled at the prospect of arrest.

Lee Cheuk-yan, a pan-democrat lawmaker, and media mogul Jimmy Lai, who announced after he was arrested his resignation as chairman of the company that owns the pro-democracy newspaper Apple Daily, both said they would seek legal advice before taking any further action. Lee and Lai have to report to police headquarters in Wan Chai by Jan. 17 latest.

“Of course we’re mentally prepared for prosecution,” said Lee, adding that protesters won’t forget the “original goal” of the Occupy protests, which is to secure “genuine universal suffrage” in Hong Kong.

Like Lee, HKFS standing committee member Tommy Cheung says he is prepared for arrest. In a Facebook post, Cheung said he felt “calm” after receiving the police call, adding that he feels “honored” to be arrested as a college student with other like-minded members of society in the “fight for genuine universal suffrage.”

Not all the protest leaders were so calm. Agnes Chew, a Scholarism committee member, said she was “very shocked” when police contacted her, and that she could not help feeling “afraid.” However, Chew says she will take responsibility for engaging in civil disobedience “as a student, a protester, and a Hongkonger.”

“I’m facing five charges since I was first arrested on Sept. 26, but I do not regret my disobedience actions,” said the 18-year-old in a Facebook post.

Wong, who rose to prominence in 2012 by protesting a Beijing-backed “patriotic education” proposal, received the police call a day after most protest leaders, but has to report on Jan. 16, a day earlier.

“Under pressure from those in power, we must still plow ahead in the coming year to change our future,” said Wong. “We have no room to compromise.”

Curiously, the three co-founders of Occupy Central with Love and Peace (OCLP), the group which originally proposed taking key roads in Hong Kong if Beijing withheld universal suffrage, have not been approached by the police yet.

Speaking on a Radio Television Hong Kong programme on Tuesday, Benny Tai said that neither he nor fellow academic Chan Kin-man nor their colleague Reverend Chu Yiu-ming were contacted.

The trio and other OCLP members had surrendered to the police on Dec. 3 and encouraged students to end their occupation. After accepting a list of self-declared offenses, police let them leave without charge.

Hong Kong media have expressed some concerns about the imminent arrests.

Because the Organized Crime and Triad Bureau contacted all the protest leaders, it suggests that police are treating the pro-democracy activists no differently than gang members from illegal societies, the Epoch Times Chinese-language Hong Kong edition reports.

The timing of the arrests is also suspect as it comes just as the Hong Kong government is starting the second round of public consultations on democratic reform in the city. If pro-democracy leaders are detained next week or embroiled in legal proceedings, the government should face less resistance on the streets and in the legislature when it tries to push through the hugely unpopular NPCSC Aug. 31 decision.

Further, there is a chance that the authorities can put the protest leaders out of action for a lengthy period of time.

By Hong Kong law, the organizers of the democracy protests face a maximum of 5 years imprisonment if found guilty of illegal assembly, according to Professor Eric Cheung from the University of Hong Kong’s Faculty of Law.

This could prove disastrous for the student protesters, who have yet to finish their education. With a jail record, their career prospects could also be hindered.

One of the students aiming for a top career sees the positive in her bleak predicament.

HKFS Yvonne Leung told her friends not to worry that she might not be able to become a lawyer, her dream job.

By joining the Umbrella Movement, Leung said, she is already pursuing “justice,” the very reason why she wanted to become a lawyer in the first place.